'The Murderous Revolution' is the real-life story of Bun Heang Ung and his daily struggle to survive the constant danger, fear, forced labour, disease and starvation, mass executions and the disappearance of family and friends, during the horrific reign of the Khmer Rouge in Cambodia between 1975 and 1979. What separates Bun from the majority of his fellow survivors is his ability to recall those indelible and vivid images from his memory and record them onto paper. Bun is an accomplished artist and his drawings provide a unique window and invaluable testimony into those tragic times.

Forced to flee Phnom Penh with his family in 1975, Bun, then a 23 year old university student studying art, headed for his home village, Maesor Prachan, 40 kilometres northeast of the capital in Prey Veng province. Assigned to work units repairing paddies, planting and harvesting rice or building dams, Bun was hospitalised, he witnessed atrocities and executions, purges of Khmer Rouge cadre and the massacre of more than thirty of his own relatives. In 1977 he married Phiny and they survived together until the arrival of the Vietnamese liberators two years later. They returned to Phnom Penh and Bun found work as an animator but wasn't happy. In December 1979, they headed for the Thai border and stayed in the Khao-I-Dang refugee camp before accepted for resettlement in Australia, arriving six months later. Miraculously, all of Bun's immediate family had survived an ordeal lasting nearly four years from which few families emerged unscathed. Phiny wasn't so fortunate. She lost her father, three brothers, two sisters and more than fifty other relatives.

Today, Bun and Phiny are settled in Sydney. They have four children, the eldest at university. He now draws cartoons for feature films and is the political cartoonist for the Far Eastern Economic Review, while Phiny is an ethnic communities liaison officer. They have both returned briefly to Cambodia, where Phiny was the subject of a tv documentary, but they intend to remain in Australia, where they have made new lives for themselves. However, the spectre of those harrowing days is never far away. On a Sydney street one day, they came face to face with the former Khmer Rouge chief of their home village, now a 'respectable' businessman in the same community.

'The Murderous Revolution : Life and Death in Pol Pot's Kampuchea' is available through Orchid Press in Bangkok. Martin Stuart-Fox has written the text, weaving Bun's personal testimony into the national perspective as the Khmer Rouge reign unfolded. Bun produced over 90 black and white drawings for the project, of which 60 were used in the book. It was first published in 1985 and was reprinted in 1986 and again in 1998.

Below left is one of Bun's drawings based on a fantasy story of the discovery of Angkor, the famous Khmer civilisation, by a young boy on a magic carpet, accompanied by his sister (click on the drawing to see the image enlarged). Alongside it is a caricature of Bun himself, taken from his Ozanimation web site.

Bun Heang Ung is a remarkably talented artist and animator. The sixty drawings that accompanied his book, The Murderous Revolution - his real-life struggle to survive the Khmer Rouge regime - are a vivid testimony of those tragic times. Bun collaborated with Martin Stuart-Fox to produce the book, which was first published in 1985. In fact, his book was published on three occasions. Bun recalls, "The old editions were poor in quality. The first was published in Sydney, second and third in Bangkok...and of course in Cambodia it was by pirate publishing. I was disappointed to see the book with poor quality, I had put so much detail into every drawing - I would like my drawing to tell the story itself. You see when I arrived in Australia 26 years ago, I had started to draw those toons from my memories almost every night for 2 years, 90 drawings, 14 hours each..." Bun would love to re-publish his graphic recollections in a book titled, Khmer Rouge and Its Evil Revolution; "I'm looking for a good publisher to put my drawings in a new form with big size printing. Fingers crossed, I'll find one."

Bun's animation work has appeared in films and tv programmes in the past and he's returning to it again, after much of the business had been snapped up by Chinese and Indian animators in recent times. He's also universally known for his searingly satirical caricatures and cartoons, having been a political cartoonist for the Far Eastern Economic Review for a number of years. However, it has a downside, as he's not been back to his beloved Cambodia in recent years for safety reasons, as he sees it, "I'm a very ugly black sheep in Cambodia. However, I draw my toons every day from my heart: Cambodia, My Home, My Soul, My Heart." His own website, Sacrava Toons, displays a wealth of his work at http://sacrava.blogspot.com. Click on the archived month - March 2005 - to see a number of his impressive drawings from The Murderous Revolution (a selection of which are reproduced below with permission - click to enlarge). 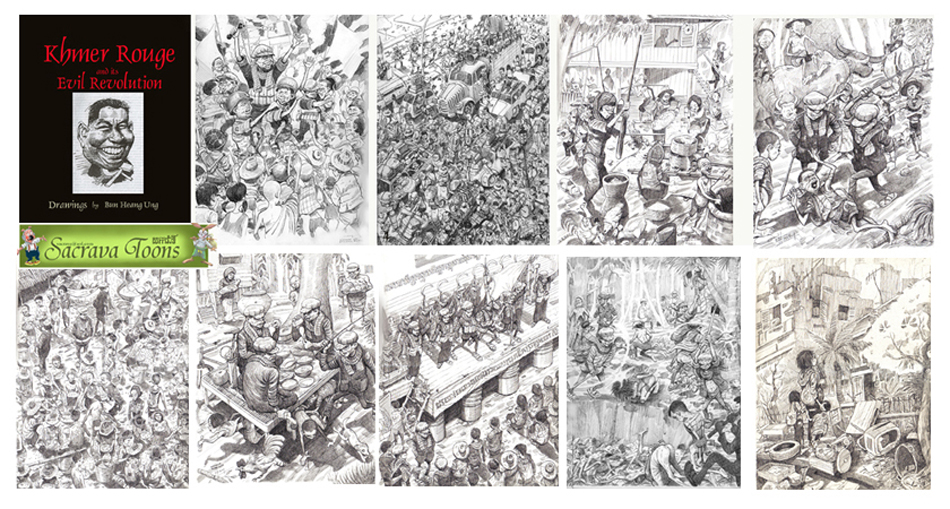 8 July 2006 : Bun Heang Ung has sent me some cartoons of myself on a moto in Cambodia and followed that up with an animated banner for my website. Have a look at them here.