From 1995 to 2004, the Documentation Center of Cambodia set about the difficult task of mapping the Cambodian killing fields. Through interviews and physical exploration, DC-Cam identified 19,403 mass burial pits, 189 prisons that operated during the Democratic Kampuchea (DK) period, and 80 memorials constructed by survivors of the DK regime. Many of those sites contain - or once contained - the remains of thousands of victims, and they are located throughout 170 Cambodian districts and almost all of Cambodia's provinces. Here are the main Genocide Memorial sites that I've encountered on my travels around Cambodia, recorded here in honour of the approximate 1.7 million victims of the Khmer Rouge period. 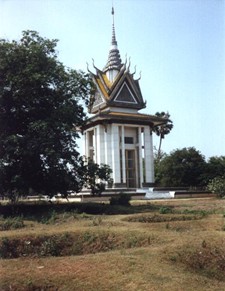 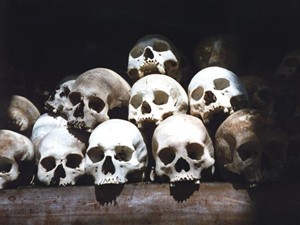 Immediately you enter the killing fields of Choeung Ek, you're confronted with the impressively-high white marble memorial chedi that dominates the whole area. It has a characteristically yellow-tiled roof with distinctive Khmer gables and was erected in 1988 to house the remains of 8,985 victims that were unearthed in 89 separate graves discovered at the site. These were disinterred in late 1980 and pictures of the exhumed skulls laid out in neat rows on the ground were some of the most graphic images I recall from tv documentaries of the time. The pits had been opened and the bones and skulls removed to estimate the number of dead. Some of the remains were found still bound and blindfolded. They were collected and housed in a simple enclosure constructed of bamboo and thatch as a lasting reminder of the Khmer Rouge period of terror. It also served as a memorial where Buddhist funeral rites could be performed to allow the spirits of the deceased a more peaceful passage to the afterlife. Choeung Ek was in essence the burial ground for those arrested and tortured at the Tuol Sleng prison in downtown Phnom Penh. Some were killed and buried at the prison itself, but most victims were shipped the fifteen kilometres out of the capital at night by truck, many still blindfolded, some were even made to dig their own graves before they were bludgeoned to death by pick-axe, hoe, iron bar, wooden club or whatever else served as a weapon of death. The Khmer Rouge refused to waste precious ammunition on their victims, many of whom were their own cadre and their families. In addition to the 8,985 victims already exhumed, another 40 pits have been left undisturbed and the final total is believed to be well in excess of 13,000. Incredibly, Choeung Ek is just one of twenty thousand mass grave sites dotted throughout Cambodia and is by no means, the largest. 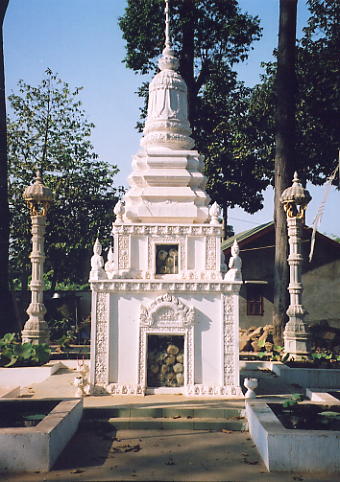 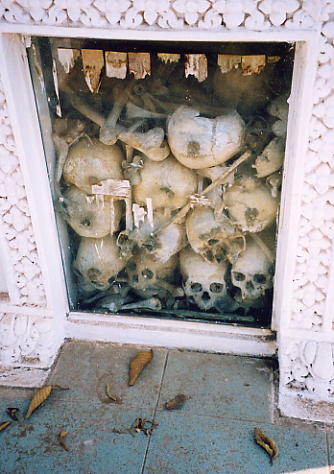 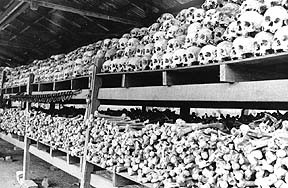 In March 1998, I went into the countryside south of Phnom Penh to seek out a killing fields memorial and eventually found the site, in the grounds of Wat Champuk Ka'Ek. It was the site of a newly-built pagoda and a concrete stupa had just replaced the former wooden construction back then (see b&w example). On a return visit in January 2005, it looked like a lot of money had been poured into this pagoda and that was clearly evident by a proliferation of family stupas, a large reclining Buddha, a school and a religious meditation centre that had sprung up surrounding the large central vihara. The stupa containing the remains of the Khmer Rouge victims found nearby had been moved a few hundred metres to a new location. Research by the DC-Cam in Phnom Penh has revealed that a Khmer Rouge prison on the site was responsible for over 18,000 deaths, where the bodies were placed in numerous mass grave pits around the temple grounds. 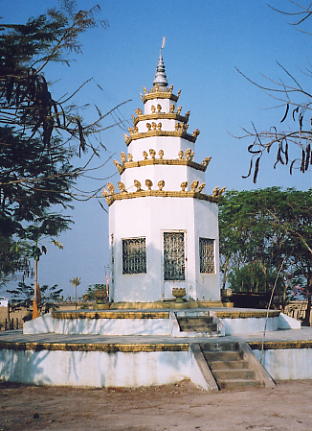 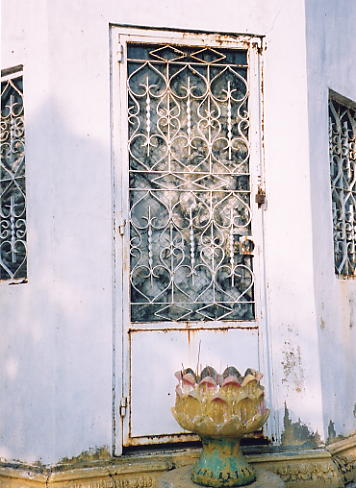 In January 2005, along Highway 6, we reached the town of Stoung and on the outskirts, off to the right and in the grounds of a small place of worship, known locally as Tuol Ta Phlorng, I visited a genocide memorial stupa containing the bones and skulls of victims uncovered in mass graves nearby. After taking statements from the local populace, DC-Cam believe that over 100,000 victims perished in the immediate area at the hands of the Khmer Rouge during their purges of the late '70s. 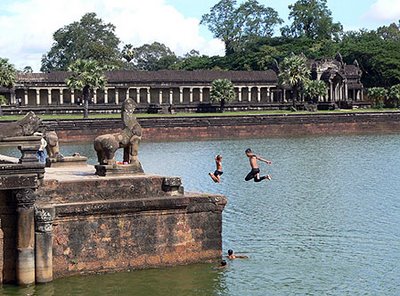 I visited this genocide memorial site, in the grounds of a new wat being built at that time, hence the name Wat Thmey, way back in 1997 when the original white-washed stupa was still in place. Today the place of rest for the remains of the Khmer Rouge victims are preserved in a new stupa and the pagoda is now known as Wat Adthekaram. It can be reached by taking a left fork on the main road towards the Angkor complex. 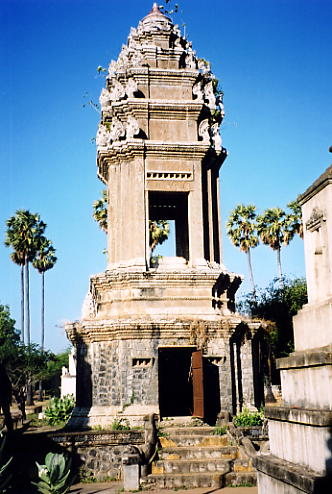 I've visited Wat Nokor, on the outskirts of Kompong Cham, a number of times. It houses an 11th century Angkorean temple in superb condition and is well worth visiting to see the carved lintels and pediments in situ, as well as the way a modern pagoda has been meshed together with the ancient temple. I wasn't aware of the genocide memorial in the grounds of the pagoda until my visit in January 2003, when Sophal, my travel companion on our tour of Prey Veng and Kompong Cham, opened the door of the large stupa and we walked into a room containing a large collection of victims' remains. 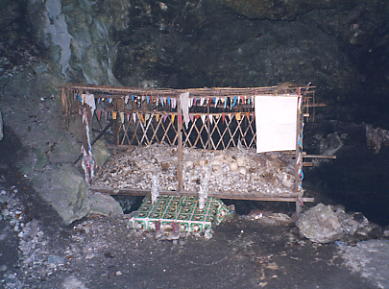 The killing fields caves of Wat Phnom Sampeou are well-known in the vicinity and are a part of the 'tourist trail' around Battambang, Cambodia's second largest city. There are two cave shrines dedicated to the victims of the Khmer Rouge and the guide will tell you how they let their victims fall to their death through a hole in the cave's roof. Closeby is a concrete building used as a prison by the Khmer Rouge. I visited the site in December 1999.

Along Route 1 heading for Vietnam, Ba Phnom is an early 5th century religious centre thought to be the site of human sacrifice well into the 19th century. Unfortunately, it was also the location of Khmer Rouge atrocities in the late '70s and the neglected genocide memorial shown above, is all that remains at the site, known as Phnom Kamphlok. Over 17,000 victims are believed to have been buried in mass graves in the area. I visited the site in January 2003 and found the memorial by accident, after stopping for a rest. 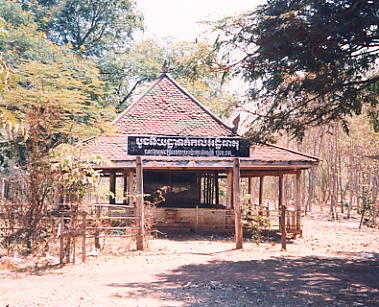 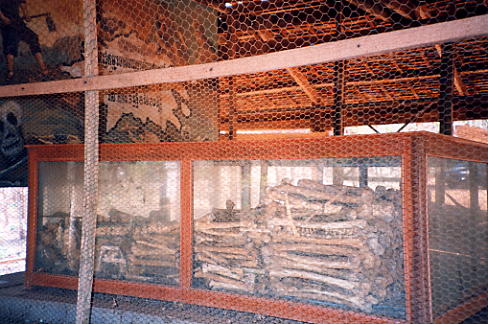 I visited the site of the former Khmer capital at Phnom Oudong in March 1998. At the foot of the main ridge lies an open-sided wooden genocide memorial containing remains taken from 100 mass graves located in the area. Most people arriving at the hill would more than likely miss the monument.

Tucked away in the corner of the grounds of Wat Sopheak Mongkol in the town of Sisophon is this genocide memorial, just off the main highway that runs to the border at Poipet. The monks at the pagoda couldn't tell me anything of the history of this memorial, although investigations in Sisophon have yielded estimates of around 20,000 victims in 100 mass graves nearby. I visited the site in November 2001. 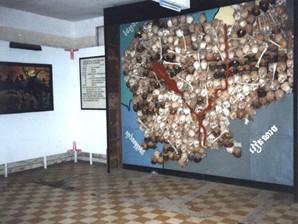 This map of Cambodia, containing human skulls and bones, was a controversial exhibit at the Tuol Sleng Genocide Museum for many years before it was taken down. These remains, found at the site of the Tuol Sleng prison, are now housed in glass cabinets in the same room. 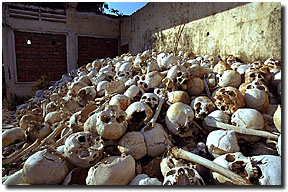 This was a killing fields memorial site I'd hoped to visit in March 1998 but didn't make it. Instead the neglected memorial above has subsequently been replaced by a stupa, erected by the head monk of the area in honour of the victims, believed to be up to 10,000, at the site of a former training college, used in the late '70's as a prison by the Khmer Rouge. The photo above is courtesy of Darren Whiteside.

During my January 2006 trip to Cambodia, I visited half a dozen genocide memorials at the following locations. Pictures and full details will follow. 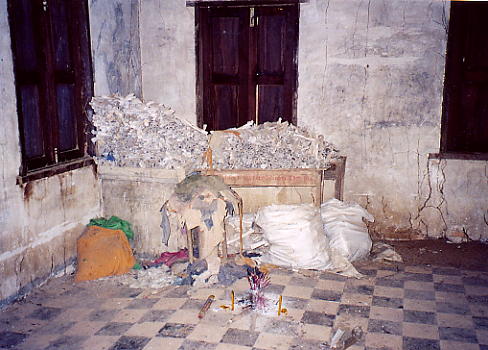 In the grounds of Wat Samrong, located near the village of Norea, a new concrete stupa is under construction, so the remaining bones from over 10,000 victims are currently housed in a small building at the rear of the main wat. Finding the person with the key was a major task. 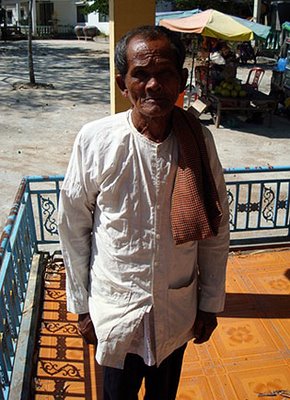 The pagoda of Wat Samdech Mony, 1 km from Prasat Wat Bassette and 12 kms from the city, houses this shiny and colourful stupa in its grounds, which was erected in 2003 with donations from far and wide. It contains bones & skulls behind glass panels. 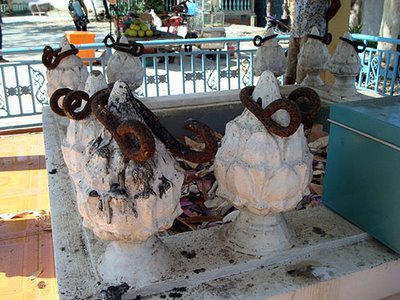 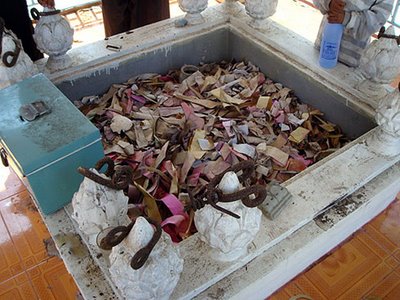 In the center of Battambang is this little-known genocide memorial in the grounds of Wat Po Khnong. Little-known aside from the locals, who open it once a year to remember the victims of the Khmer Rouge. That is until I asked if the key could be found, which is was and a well-kept memorial was revealed, generating a crowd of curious onlookers.

Rachel Hughes from the University of Melbourne, Australia, made some interesting observations in her 2004 article, 'Memory and sovereignty in post-1979 Cambodia: Choeung Ek and local genocide memorials' for a new book published by Yale Center fo International Studies, edited by Susan Cook and called Genocide in Cambodia and Rwanda: New Perspectives. I've re-printed a selection of her views in order to provide some background information to the genocide memorials you see above:

The most distinctive feature of the Choeung Ek Memorial Stupa is the prominent display of exhumed human remains. The role designated to the exhumed human remains is as quantifiable evidence of the crimes of Democratic Kampuchea. Meanwhile, scores of local-level memorials throughout Cambodia mark sites of former Khmer Rouge prisons and mass graves. Municipal, district or village authorities built the majority of these memorials in the early 1980s. Local memorials provided a public space for remains of victims and a location where religious rites could be performed (though not cremation). The building of local memorials, predominantly in the form of stupa, fused pre-existent religious practice with official concern for the maintenance of evidence of crimes against the populace. Local memorials stand in places where victims were buried, incarcerated or executed. Almost without exception, local memorials contain (or once contained) human remains. Remains were taken from graves in the local area, were uncremated, and are visible inside the memorial structure, as at Choeung Ek. As the Khmer Rouge often used temple buildings and compounds for imprisonment and mass burial, memorials consistently occur inside or near to a wat. Memorials may also be located within temples because of the auspicious nature of temple grounds.

Many local memorials have been rebuilt since the early 1980s. Local communities have provided the impetus, labor and funding for such projects. Other memorial reconstructions have enjoyed explicit party-political support. One such new memorial is found near Lake Bati, at Trapeang Sva in Kandal province, a few hours drive south of Phnom Penh. Before 1999 this memorial was made up of a large collection of human remains shelved inside a derelict building (a former teacher’s college used as a prison by the Khmer Rouge). The new memorial is a small, pale blue concrete stupa located nearby. The new stupa houses part of the collection of remains taken from the previous memorial. Near the new stupa is a large rectangular concrete signboard listing, in Khmer, the names of donors and also gives the inauguration date of the memorial (July 2, 1999). Other local memorials built during the early 1980s have not been rebuilt. In most cases, exposure to natural elements has resulted in the deterioration of the built structure and the physical remains contained within. Roaming cattle often cause additional disturbance to the memorials. The economic and labor costs of maintaining these sites are often too great for poorer communities. In other places, local memorials displaying human remains may have been unpopular ventures from the outset; considered unhelpful or offensive, they have been left largely unattended. Re-printed courtesy of Rachel Hughes.