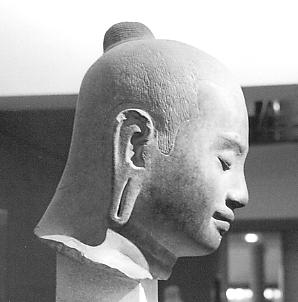 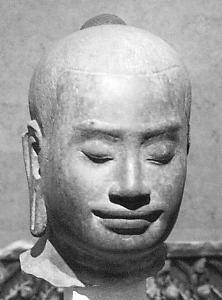 The Guimet Museum in Paris, France holds the world's most comprehensive collection of Cambodian sculpture and art outside Cambodia itself. The Museum was completely renovated between 1998 and 2000 at a cost of $48 million and the Cambodian collection maintains pride of place on the ground floor. At the time of my visit, in November 2004, the Cambodian collection on display to the public contained 200 separate exhibits. The pictures on this page highlight just a few of the beautiful sculptures on display. One of the centrepiece items is the immaculately sculptured head above, believed to be King Jayavarman VII, and matching one housed in the National Museum in Phnom Penh. It's from the latter part of the 12th century and made of dark sandstone. Below, is a frieze of female dancers (Apsaras) taken from the 12th century temple of the Bayon at Angkor. This frieze formed the lower part of a pediment and contains nine apsaras, very similar to friezes found at Preah Khan. 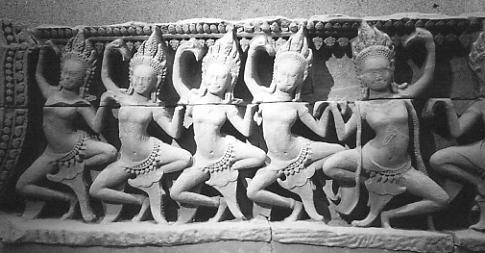 Below are two male figures, one an 11th century head of Buddha from the east entrance of Ta Prohm in the Baphuon style and the other, a giant Dvarapala guardian figure from Preah Thkol temple at Preah Khan, Kompong Svay. Made of sandstone in the late 12th century, it was brought to France by Louis Delaporte's expedition in 1873. 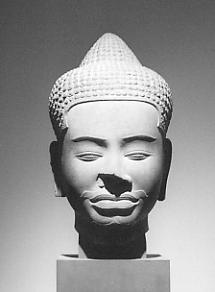 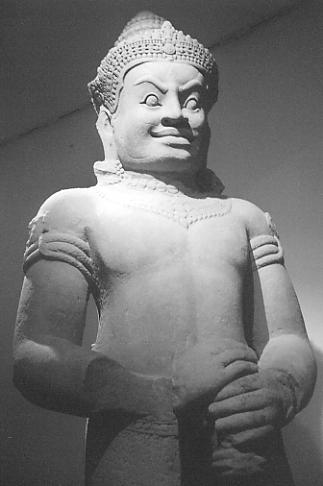 Below left is the head of Shiva from the temple on Phnom Bok. It's an early 10th century sandstone piece, one of a Phnom Bok triad at the Museum, the others being Brahma and Vishnu, whose bodies have never been found, and were carried to France in 1873 by Louis Delaporte. On the right is a large free-standing Vishnu from Prasat Rup Arak on Phnom Kulen. This is an early 9th century sandstone sculpture, holding a disc and conch but minus its two other hands, which would've held a club and a globe. 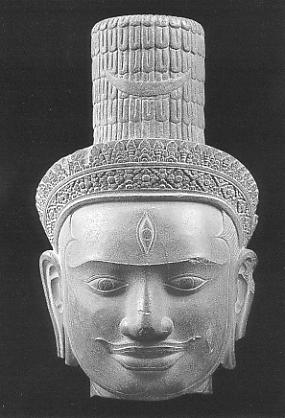 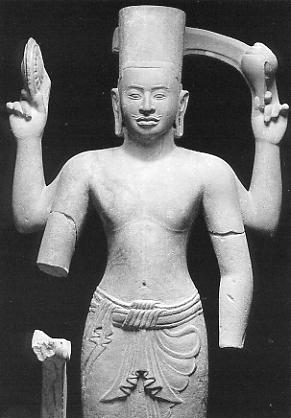 Below left are three divinities, believed to be from the 12th century though their location is unknown. In the middle is the Giant's Way from Preah Khan, Angkor. This is the first item on display as you enter the Cambodian collection and is a re-assembled 12th century Naga, on show for the first time since 1889, having been brought to France by the Louis Delaporte expedition. The Museum, closed for three years before its grand re-opening in January 2001, was originally founded by industrialist Emile Guimet in Lyon in 1878. On the right, the seated Buddha protected by the naga Mucilinda is from the Bayon temple at Angkor (12th century). 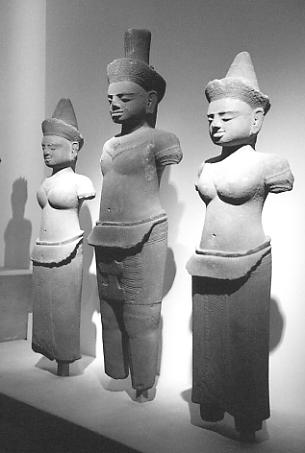 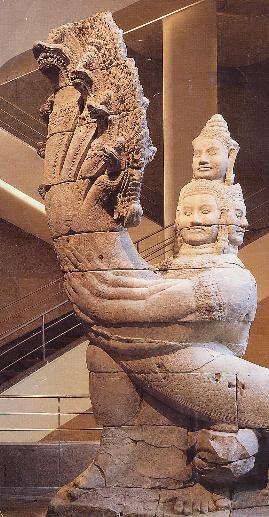 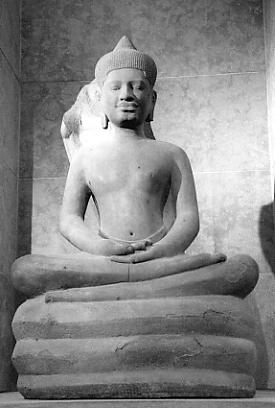 Below left is a finely-detailed Naga with Garuda from Preah Thkol at Preah Khan, Kompong Svay. It's sat on the end of a balustrade and is from the 13th century; below the Garuda is a three-headed Naga, whilst alongside it is a six-headed Naga. In the middle is a Vajimukha statue from Sambor Prei Kuk. This has a human figure and a horse's head and is in the Pre Rup style of the 10th century. The fragment of a lintel from Phnom Da is on the right, showing the Churning of the Sea of Milk. The scene shows Vishnu entwined around Mount Mandara (represented by the pole), atop a turtle, Kurma. The naga Vasuki is held by two teams - gods and demons. Brahma is sat on top of the pole while Lakshmi peers over the turtle. 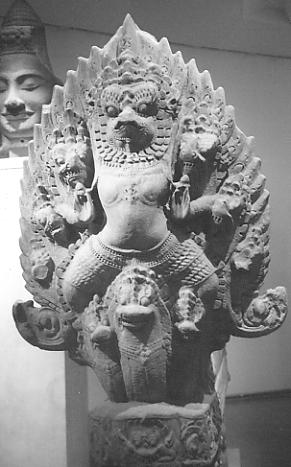 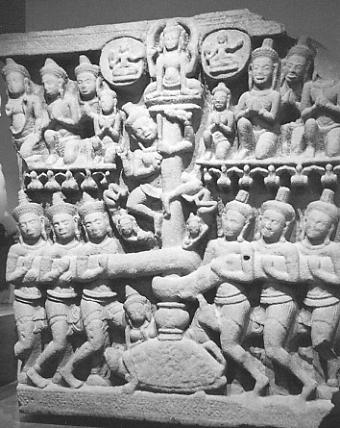 Below is a pediment from the east gopura of the third enclosure of Banteay Srei, where some of the finest examples of in-situ Khmer carving can still be found. Sculpted in pink sandstone and dated 967, the pediment could not be reconstructed at the site by Henri Marchal in 1936 and was given to France and the EFEO as a gift for their work in restoring Cambodia's monuments. The central characters are Sunda and Upasunda vying for the attentions of the beautiful Tilottama. 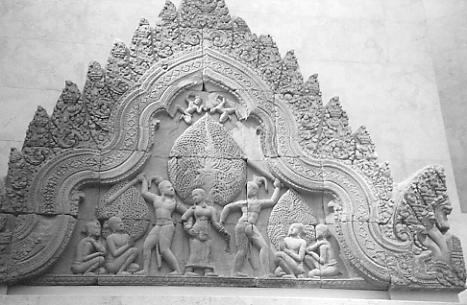 The photographs above represent a small sample of the incredible array of Cambodian art at the Guimet Museum. Quite rightly in my view, the collection is not as extensive as the one at the National Museum in Phnom Penh, which has considerably more pieces on display. However, I recommend you visit the Guimet Museum if you have the opportunity. Photographs are allowed (without flash), natural light floods the main hall and you are free to wander around the exhibits, examining them at very close quarters. In addition to the above, there are many other items on display worth mentioning. They include an array of gloriously decorative lintels, lingas, two lions, an elephant and many other figures. Particularly outstanding and not shown here are a large Harihara from Asram Maha Rosei, a four-headed Brahma from Vat Baset, Battambang, two standing Vishnus from Phnom Kulen and a dancing female divinity from Prasat Thom at Koh Ker. In addition, there are a collection of items from the now-ruined Preah Khan temple complex in Kompong Svay including a large Buddha with naga and a Bodhisattva Lokeshvara. Overall, well worth taking time out from the sights and sounds of Paris to spend a few hours meandering the corridors and collections of this exceptional Museum dedicated to Asiatic art.

To enjoy a virtual tour of the Guimet collections, click here.