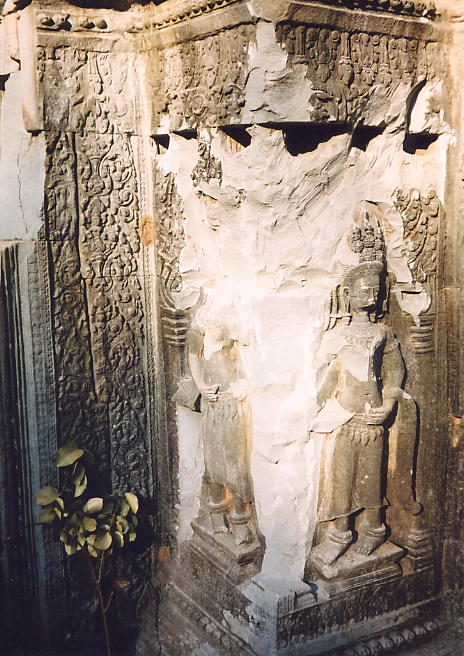 An example of the rampant destruction of Cambodia's cultural heritage at Preah Khan of Kompong Svay.

Cambodia Tales is proud to support HeritageWatch, a non-profit organisation that is dedicated to preserving cultural heritage.

Currently the organisation is focused on Cambodia where the destruction of archaeological sites is rampant. HeritageWatch was established in the year 2003 by Dougald O'Reilly and concerned colleagues who now serve on the Board of Governors of HeritageWatch. As Cambodia is home to the World Heritage site of Angkor, the archaeological heritage here is extremely valuable. As great and imposing as Angkor is, we have no firm idea about the processes that led to the formation of the civilization that left us the monuments at Angkor.

HeritageWatch is recognized as an international non-governmental organization in Cambodia. The organization aims to raise awareness of the problem of heritage destruction through public education campaigns in the print media, radio and television. Other projects include working at Koh Ker archaeological site with the aim of involving the local population in heritage protection, training for customs officials and the creation of databases documenting incidences of heritage theft.

Presently HeritageWatch is engaged in a training programme at the Royal University of Fine Arts. Young Cambodian archaeologists are being taught research methods and analysis by HeritageWatch staff. The project includes a field component which involved the survey and excavation of the looted site at Wat Jas. Regrettably little in situ information could be recovered from Wat Jas as the site had been completely destroyed by the activities of looters. Thousands of deep holes riddle the 120 ha site which contained an Iron Age (c. 500 BC-AD 500) cemetery. Looters are motivated to dig by the prospect of uncovering carnelian, agate and sometimes gold beads which are sold to a middleman for sale on to collectors and dealers in Thailand. The HeritageWatch project undertook a survey of the looted area and collected disturbed ceramic materials and mapped the entire site. Aerial photographs were also taken which reveal the shocking extent of looting at Wat Jas.

HeritageWatch continues to promote the preservation of Cambodia's cultural heritage through the distribution of Wrath of the Phantom Army, a comic book that tells the story of looting in a small village. The Khmer language version is being distributed for free in areas where looting is a serious problem. The organisation has also produced radio and television public service spots that are airing currently and will, hopefully be aired on government outlets in the near future. Education teams have also been working in areas where looting is prevalent, hosting large gatherings of locals. The purpose of these sessions is outreach, explaining the value and importance of cultural heritage. These activities have been greeted positively and after-meeting surveys indicate a change in participants attitudes. HeritageWatch is currently applying for funds to work at Koh Ker Archaeological Park, a grouping of temples northeast of Angkor dating to the 10th century. The Sustainable Development and Heritage Preservation Project seeks to involve the local community in heritage preservation in return for training in small business management, tourism, craft production, English language and land rights.

No-one can ever accuse the folks at HeritageWatch of standing still. Committed to preserving Cambodia's rich cultural heritage through education projects and campaigns, they kick-off their brand new Heritage Friendly Tourism Campaign next month and are leaving no stone unturned in preaching their message, in collaboration with the Ministry of Tourism, in a nationwide appeal. The campaign will seek to promote responsible tourism that'll include arts festivals, arts and crafts expositions, architecture tours, golf tournaments, seminars and expert speaker tours, whilst businesses will be encouraged to become Heritage Friendly. They want to highlight the projects implemented by research teams and arts/culture groups via Insight Magazine with a print run of 100,000 that will be distributed widely to visitors. 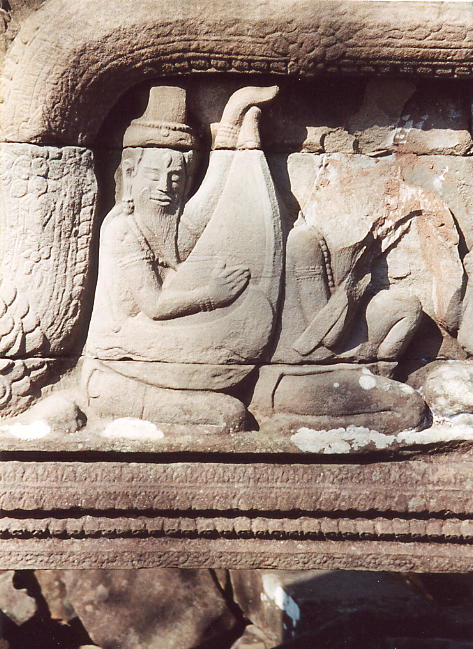 The disfigured face of Valmiki, the poet, on a pediment from the eastern pavilion at Banteay Chhmar.

My personal thanks to Dr Dougald O'Reilly for his help .