Cambodia here we come, trip number ten beckoned in December 2003. On the flight out from England, I chatted to Kerry from Romford who was on her way to Australia and we had a coffee when we touched down at Kuala Lumpur before going our separate ways. I was met by Phalla and five of the younger girls from the Tuol Kauk family when I arrived at Pochentong, and driven to the Dara Reang Sey hotel in Phnom Penh, to be greeted warmly by Reangsey and her new baby. Also staying at the Dara were Don from the Lazy Mango 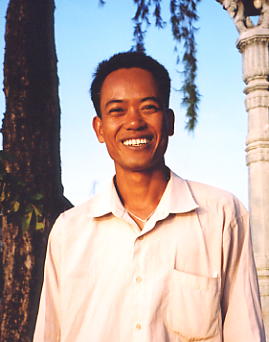 bookshop as well as Val and Jane, who'd helped out at my last Magic event, back in England. All three of us were invited to the Tuol Kauk house for a welcome party and Phalla returned at 5pm to collect us. We enjoyed a massive feast, at least twenty-five people came and went during the evening's festivities including Ara and Lina who'd arrived back from Sihanoukville in time, and we rounded off a great night with tikaloks on Monivong Boulevard. The next morning the three of us shared a taxi to Kampot, 150kms to the south, leaving at 8am from the Damkor market, stopping off at Prasat Neang Khmau for a photo with the monks and to show Val and Jane the two old brick towers located just off the main road. We also had to wait while a house, yes a house, was carried across the main highway on wheels! We made Kampot by 11.30am and met Dara at the taxi-stop as arranged - Dara had been recommended as a guide and is a fountain of knowledge - before a fresh-prawn lunch at the home of Kong and Naisim, family friends I knew from a previous trip. Also joining us was Ann, a teacher I met at Tima's wedding in January. I booked into the Kampot guesthouse ($10 for fan and shower) before returning to Kong's house at 2pm.

Over lunch I'd asked Kong to take me to visit the burial stupa of my close friend Sok Thea, who died in 2000 and he was very happy to accommodate my request. I'd made a promise to Thea's family in Phnom Penh that 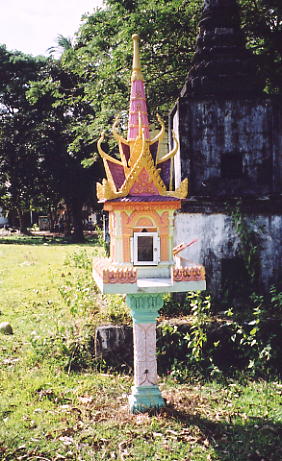 I would pay a visit to his stupa, and the pagoda at Wat Kabal Romeas, was a six kilometre ride on the road towards Kep. The stupa was a colourful affair just behind the main vihara and within sight of Thea's actual birthplace just a few hundred metres away, and despite the crowd of children that descended upon is, it was an emotional reunion for me. I'm not usually one for sentiment, but Thea's enthusiasm, adventurous spirit and friendship had been a metaphor for my love of his country and its people and I will always miss his presence. I was really pleased to say hello to my friend again. I was back in Kampot by 3.30pm and took a ride around town with Dara, and his Dutch girlfriend Henrika, stopping off at the derelict city hall, where we found a mountain of abandoned official papers and a rusty hand-gun. Dara reminded me that the nearby Governor's house was used in the recent Matt Dillon movie, City of Ghosts, as we headed out to the Tek Chhou rapids eight kilometres outside of town for a paddle in the refreshing water. We met up with Jane and Val, who were enjoying a swim, before returning to the riverfront in town to watch the sun set across the river and to meet a few high school students who stopped to say hello. For our evening meal, we walked to the Ta Ouv restaurant, out on silts over the river, with the local bug population for company, though the sweet and sour chicken was pleasant enough. Tikaloks at one of the drinks stalls on Bridge street rounded off the evening, though I lost my bearings walking back to the guesthouse and the walk took forty minutes instead of ten! I arrived back at the Kampot GH just after 10pm, annoyed with myself as I'm usually very good with directions, even in the pitch-black darkness. 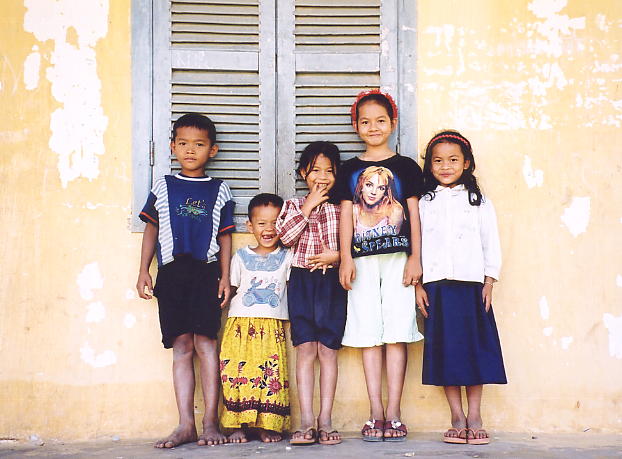 Day 2 in Kampot began with an omelette breakfast and at 7am I was collected by my moto-driver for the day, Chok, with whom I was going to investigate at least three cave sites where in Angkorean times, temples were erected in the cave itself. Extremely unusual but very intriguing. My research showed that the farthest one away was near the town of Tuk Meas so that was our first target. Taking the Kep road, we forked left at the white horse and took an hour to reach Kompong Trach, before taking a left turn at the Kanthor health centre and carrying onto Tuk Meas, which we reached at 9am, with Phnom Trotung as our actual destination. The hill was another twenty minutes away, over the main railway line where we declined the offer to ride the 'rail-lorry' back to Kompong Trach, though I was sorely tempted. This platform on wheels is propelled by a small outboard motor engine and is a neat way for the locals to travel between destinations on the railway line. They just have to remember to dismantle it when the train is due. The guys at the cement factory directed us to the monk's houses and the first of the 200 steps up the hillside leading to the cave entrance. Phnom Trotung is the easiest of the caves to visit, with a couple of steps before you see the modern shrine, immediately behind which is the square brick tower, in remarkably good condition, accompanied by the squeal and flapping of the many bats who share the cave. With my torch I could see a large stalactite descending into the top of the tower, which didn't have any decorative carvings, though a well-worn lintel sat on the floor near the doorway. I guessed the lintel style to be around the seventh century. We returned to Tuk Meas and Chok took a supposed shortcut before realising he'd taken the wrong route and we backtracked, before reaching Phnom Khyang an hour later. The hill was behind a school and we scrambled up the slippery slope to the mouth of the cave and descended the rickety ladder into the darkness. We then had to squeeze through a gap in the rock and into a larger cavern where the brick temple in immaculate condition, was standing. Whilst I couldn't see any carving, there were recesses built inside the tower wall for offerings. I climbed out of the sweltering hot cave and rested at the village school nearby, handing out sweets to some of the children brave enough to say hello.

Riding into Kompong Trach at noon, before stopping for a bite to eat we visited Wat Kirisan at the foot of a rocky limestone outcrop. The resident monks were eating their lunch so Sovan and three small children, guided us through a series of caves into an open green space in the hollow centre of the outcrop, with a reclining buddha in one corner and rock formations in the other, accompanied by a myriad of bird-calls. The formations Sovan explained to Chok, who translated as best he could, were in the shape of a huge fish, an elephant and a monkey. There were also musical stalactites, which resonated when struck and rock patterns that resembled one hundred small rice fields. I didn't have the heart to disagree. After some noodles in a Kompong Trach eatery, we raced back towards Kampot dodging a series of road-widening schemes, turning off the main road near a Cham fishing village and travelled five kilometres before parking up in a house and walking through rice fields to the foot of another limestone hill. It turned 3pm as we climbed the 200 steps to the wide cavern entrance that led down to a large brick temple, where a Khmer family were lighting incense sticks and playing traditional music on a battery-powered radio. The prasat inside Phnom Chhouk was in good condition with some detailed carving on the walls and half a lintel in situ, with a large stalactite growing into the roof of the temple. 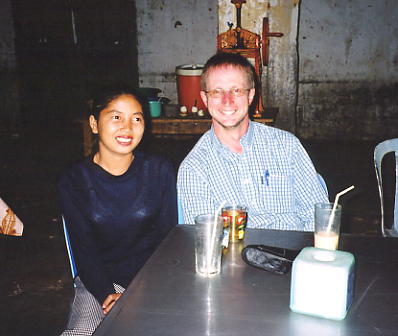 Back in Kampot a little after 4pm, I stopped at Kong's home to practice English with his young daughter Soriya and then had an ice-cold drink at the Bokor Mountain Club before I sat on a bench on the riverfront to watch the sun set across the river. At various times I was joined by Watha, a primary school-teacher and Socheat, a photography shop-worker, who asked me all the usual questions. I was then joined by Jane and Val at the Prochim Mith restaurant, with Dara and Henrika also arriving, and then enjoyed tikaloks at the stall of Nee, of the gorgeous smile and tasty fruitshakes. Val and Jane were great company and it was a pleasure to spend time with them before their departure to Kep the next day, and I recommend Nee's stall on Bridge street for the best tikalok in Kampot. First thing the next morning, Ann popped round to my guesthouse to see me off at 7.30am, apologising for not joining us the previous evening, as my share-taxi collected me for the three hour ride back to Phnom Penh. Back in the city, I visited Sopheap and his wife Serey and child Sottary at their home in the southern part of the city, before a jacket potato at The Rising Sun pub served by the lovely Samnang. Excellent food and excellent company. Say hello to Samnang next time you're in the Rising Sun and definitely try out the pub grub. At the Dara, I had a chat with Reangsey and her husband Srun before bed at 10.30pm, ready for my trip to the far north of the country early next day.

December 2003 marked my tenth trip to Cambodia since my first-ever visit in 1994. It's a country that has a special magic all of its own and which draws me back every year to venture out into the Cambodian countryside in search of new adventures, ancient temples and to catch up with the friends I've made from previous visits. Each trip is full of laughter, smiles and a host of fresh experiences and my latest expedition was no exception.