'This is a story of war and friendship, of the anguish of a ruined country and of one man's will to live.' - Sydney H Schanberg

One film, more than any other, made such an impact on me that I can vividly recall scenes from it without any difficulty at all. That film, which I first saw in 1985, is The Killing Fields, a story of friendship that endured against appalling odds in war-torn Cambodia. Filmed in Thailand on a budget of $15 million, it recounts the true story of Dith Pran, a Cambodian assistant to American journalist Sydney Schanberg of The New York Times. After the fall of Phnom Penh to the Khmer Rouge, Schanberg was allowed to leave while Pran, forced to work long, hard hours in primitive conditions and under the constant threat of death, remained behind. Enduring four and a half years of privation and fear, Pran dramatically escaped across the border with Thailand and was reunited with his friend and mentor Schanberg in a Thai border camp on 9 October 1979, uttering the immortal words, "you came Sydney, you came."

One of the movie's best reviews I've read comes from Peter Reiher, which I've re-produced here to provide a flavour of the film: The Killing Fields is an extraordinarily powerful film, the best new film I've seen this year. It's a strong indictment of modern war in general and the American conduct of the war in Cambodia in particular, but its great strength derives from its secondary themes of the power of friendship and the importance of a will to survive, as well as general comments on accepting responsibility for one's actions. This rich combination of themes is what lifts The Killing Fields above most other films.

The Killing Fields is based on a true story. Sydney Schanberg was the New York Times correspondent to Cambodia during the 70s. He worked closely with his interpreter, Dith Pran, a Cambodian journalist. Together, they exposed many of the US atrocities in Cambodia which resulted from our secret war there, a spillover from the Vietnam War. Sydney and Pran also became good friends, but when Lon Nol's government fell and Pol Pot took over, Schanberg was able to escape and Pran could not. As Schanberg heard more and more of the horrors of the Pol Pot regime, Communism gone mad, he castigated himself more and more for persuading Pran to remain even when it was no longer safe. Meanwhile, Pran struggled to survive in a nation in which 3 million people, out of a population of 7 million, were killed in the course of a few years.

Above: Dith Pran and Sydney Schanberg

The Killing Fields is composed of three separate segments. First, we see Sydney and Pran at work in war-torn Cambodia. Then, as things fall apart, the journalists seek refuge in the French embassy in Phnom Penh. Finally, Pran tries to stay alive and escape from a hell on earth while Sydney guiltily receives the rewards for their work in the safety of America. The filmmakers deserve much credit for seamlessly binding together three separate stories. The Killing Fields is very much a cohesive entity, yet, running through the individual scenes in one's mind, it is easy to see how even slight carelessness could have made the film into a string of marginally related incidents. Bruce Robinson's script and Roland Joffe's direction combine to form thematic lines which run throughout the film, holding it firmly together. The major weakness of the film, Schanberg's disappearance from the latter third of the film as an effective character, is a limitation of the true story. The filmmakers are to be commended for working within this difficult restriction rather than coming up with a cheap Hollywood rescue mission ending.

Joffe, a BBC director, makes a fine debut. The Killing Fields is very well directed, albeit in a somewhat impersonal style. The shots are well selected, with an emphasis on naturalism. There are few of the flourishes which might expected from a more strong willed director. As might be expected, most of Joffe's most impressive sequences concern atrocities, but these are not presented with the bloodthirsty glee so common in films nowadays. Blood is spilled, people are killed, people are tortured, but Joffe does not show it to us as entertainment. Rather, he makes us see that it an integral part of the story, something we cannot just turn away from, for it explains the tragedy of Cambodia.

Joffe is just the sort of director that appeals to producer David Puttnam. Puttnam, who previously produced Chariots of Fire and several other fine films, is a producer from the old school. His films are really his. Puttnam is the major creative force behind The Killing Fields. The success of the film is due less to individual excellences than inspired balancing of all of its elements. Each creative position has been filled by a fine craftsman who shares the common vision. Puttnam's genius is less for choosing perfect material for films than his ability to see what he wants and find people who can make his vision come to the screen. It may not sound like a very impressive talent, but Puttnam is the only working producer who consistently displays it.

While all elements of The Killing Fields are laudable, some deserve special attention. The performances of Sam Waterston and Dr. Haing S. Ngor in the leading roles are vital to the film's success. Waterston is a fine actor who combines the rare traits of decency and intelligence. He's been performing in supporting roles in American pictures (The Great Gatsby and Heaven's Gate) and leading roles in British films (Sweet William and Eagle's Wing) for some years, but has never broken through with a major role in a major American picture. He reminds me of James Stewart, with a bit less naivete. I have always liked his work, particularly his role as the narrator of The Great Gatsby. He gives another fine performance in The Killing Fields, delicately balancing ambition and conscience. Dr. Ngor is not a professional actor. Dith Pran is his first role. However, he survived through experiences in Cambodia remarkably similar to Pran's. As a result, the truth of his performance shines through any technical inexperiences. We believe his sufferings and sacrifices, perhaps because he can pull them, direct and horrid, from his own memory.

The supporting cast is also sturdy. John Malkovich, last seen as the blind boarder in Places in the Heart, plays a hot tempered photographer. Such a different role, so convincingly portrayed, is bound to do his career good. Our gain, too, for we can always use more good actors. Craig T. Nelson demonstrates that he has the lock on middle level military authority figures, playing yet another Air Force officer. Fans of Call to Glory can get some cheap kicks figuring out if the character is the same in TV show and movie. It would certainly add some interesting dimensions to the TV show if he were. Athol Fugard and Bill Paterson have fairly small supporting roles as other journalists.

The photography is excellent. Yet again I find myself without the name of a key figure, in this case the cinematographer (ed. it was Chris Menges). He blends the beauty of the Cambodian countryside (actually neighboring Thailand) with the horrors of war. The battle footage is convincingly like documentary footage from Vietnam in style, though better in technical quality. The cinematographer and Joffe deserve credit for not showing us Cambodia as an exotic, foreign place full of incomprehensible things. Rather, they present the similarities amid the differences. We cannot merely dismiss The Killing Fields as more mysterious Asians mistreating each other, and Westerners, for their own inscrutable reasons. We must face their actions as the natural consequences of modern war and fanatical ideology anywhere.

The Killing Fields is not a tutorial on American atrocities in Cambodia. Little time is spent moaning about how we have destroyed the country in our typically heartless American way. None the less, the subtext definitely presents American thoughtlessness and callousness as a primary cause of Cambodia's suffering, and the specific destruction of Cambodia through saturation bombing is far from overlooked. Joffe and Puttnam do not settle for the cheap and popular solution of saying that it's all the fault of the rotten 'ol USA, though. Cambodia owes part of its problems to Vietnam, and part to itself, and The Killing Fields, in the same low key way it points the finger at the US, indicts these other forces.

The human, more than the political, is the core of The Killng Fields. Fundamentally, this is not a film about one war in one place, but about the ravages of war in general. The specific villains are of less concern to the filmmakers than the motives behind the villainy, motives all too common in the world. The success of the film is due to the skillful, but unmanipulative, counterposing of the power of friendship. The Killing Fields is not an easy movie, but it is a very fine one. (Review by Peter Reiher, 1985).

It's a movie that brought the tragedy of the Cambodian holocaust to the attention of the public at large. The star of the film in my opinion was undoubtedly Haing Ngor. A physician by profession, Ngor was imprisoned and tortured by the Khmer Rouge before escaping to Thailand, mirroring almost exactly his portrayal of Dith Pran in the movie (picture below). With no formal acting experience, his masterful performance won him an Oscar as Best Supporting Actor, the first non-actor to do so since 1946. He went onto combine his acting career in films like In Love & War, Iron Triangle, The Dragon Gate and Heaven & Earth with refugee and human rights work before his untimely death in February 1996, murdered by members of a Los Angeles street gang. His powerful autobiography, 'Surviving the Killing Fields', written with Roger Warner in 1988, tells his incredible life story. 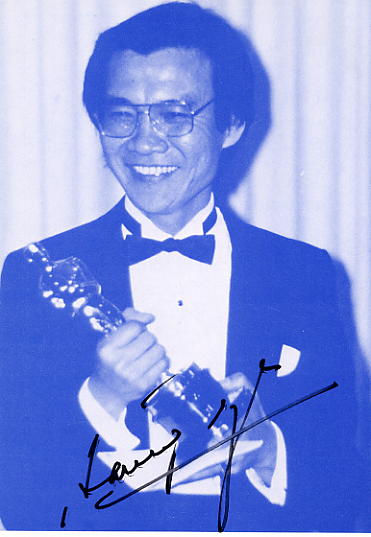 The film proved to be a breakthrough for many of the members of the cast and crew. It was director Roland Joffé's first film (up to that time he'd directed only television series in the UK) before he went onto direct The Mission in 1986 and later, City of Joy and Vatel. Sam Waterston (who played Schanberg) and John Malkovich also saw their careers take off. In the film, Malkovich played the legendary photographer Al Rockoff, who can regularly be found in the Foreign Correspondents Club in Phnom Penh (although he was never happy with his portrayal in the film). Julian Sands, who played the part of Jon Swain, later starred in Boxing Helena and Vatel. Swain, a London-based journalist for the Sunday Times, is the author of 'River of Time,' one of my favourite books on Indochina. Of the film, he said, "I owe my life to Dith Pran. How he saved us from certain execution is scrupulously and flawlessly told in this film."

Based on a New York Times Magazine article written by Schanberg, entitled 'The Death and Life of Dith Pran,' the movie was nominated for seven Oscars, winning three (Best Supporting Actor - Haing Ngor; Best Cinematography - Chris Menges; Best Film Editing - Jim Clark), as well as collecting nine British Academy Awards. It's particularly memorable for images of the piercing scream of a child in the midst of battle, a hospital filled with dead and dying children or the evacuation of the entire population of the city of Phnom Penh into the countryside. There's Pran's desperate pleas to their Khmer Rouge captors to save his journalist friends, the soul-destroying failure of a passport photo that could've saved him or his stumbling through a field that has become a mass grave for his countrymen. All of them, vivid and emotional images from a film that helped trigger my own passion in Cambodia.