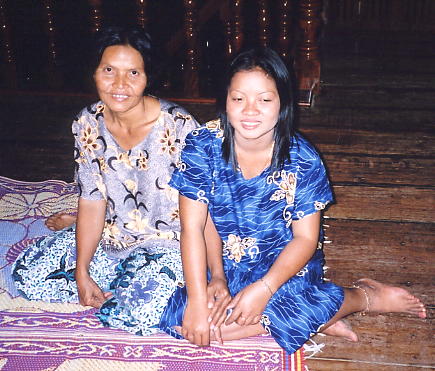 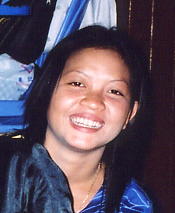 One of the most rewarding things about returning to Cambodia is meeting up again with old friends. One such individual is Noung, who I first met as a bright and bubbly twelve year old souvenir seller, in the corridors of Angkor Wat in March 1998. Her lively personality won me over that day and we've remained good friends ever since. As one of many vendors who eke out a living for themselves and their families amongst the main temples in the Angkor Park, Noung and her family have a couple of stalls on the northern approach to the central sanctuary at Angkor Wat, where they sell the usual array of t-shirts, silk sarongs and kramas and other trinkets, as well as refreshing ice-cold drinks. The whole family get involved in the business with Noung, her brothers and cousins helping out her parents at different times of the day. For her part, Noung has become a consumate saleswoman and is able to close a deal in at least four languages.

The family live in a wooden house on stilts in a small village near Srah Srang lake, they've all become good friends of mine and have made me very welcome at their home on many occasions. Getting to know them has given me a window into the daily challenges they face in making a living from the souvenir business. For example, there is constant talk of moving all of the souvenir stalls out of Angkor Wat and I'm never quite sure they'll still be there when I return on my next trip. One face who has disappeared is Noung's elder sister, Sokchata, who married her Japanese husband in December 2000 and emigrated to live in Japan. In March 2005, I got word that Noung herself had got married - it remains to be seen whether she will still be at Angkor Wat on my next visit to the temple.