Day three began with scrambled eggs and coffee for breakfast at the HanumanAlaya and the arrival of the 4WD with Rieng and Heng at 8am. Today's outing was supposedly a non-temple location, namely Kompong Phluk, described variously as a floating village and a submerged forest, some ten kilometres south of the Roluos group of temples. I'd previously spent time in and around the lakeside village of Chong Khneas, the most popular floating village closest to Siem Reap, but Kompong Phluk was getting 'good press' from a few people in the know, so it

was time to see for myself. Both of my companions had been before and promised me an enjoyable trip. I was looking forward to it, and wouldn't be disappointed.

mention. The road from Siem Reap to Roluos is in excellent shape these days and its almost as good as you reach Roluos town itself. With the busy early morning street market in full flow right across our path, our progress was reduced to a crawl through the town centre until we left the tree-lined streets behind and joined the raised sandy track heading toward the Tonle Sap Lake off into the distance. For most of the wet season, the fields either side of the road are

underwater and so rice is grown in abundance as the water recedes. We spied a variety of birds in the muddy stream flowing alongside us but few people as our 4WD came into its own along the challenging track, which Heng negotiated like a true professional. We passed a Camry stuck in deep mud and all agreed that only a 4WD, moto and ox-cart could make this trip. After an hour, we reached the end of the track, a busy dock with small motorised boats waiting to take passengers the final couple of kilometres along the Roluos river to the village itself. We parked the 4WD and took our places in a boat with half a dozen locals and a selection of bicycles, chickens and market produce. It cost 1,000 riel each and the final leg of our trip took a little over ten minutes.

As we rounded a bend in the river, the outskirts of the village came into view and was quite a dramatic sight to behold. Rather than a floating village in the Chong Khneas style, the houses of Kompong Phluk are built on top of wooden poles and stilts between six and eight metres high and tower over the boats moored along the river, which snakes through the village before heading out into the Tonle Sap lake. Behind the

riverside homes are more wooden houses on stilts, which are permanent residences during the wet season and then only accessible by boat. However, today, the village 'high street' was bone dry and reminded me of a film-set from a wild west movie, without the ubiquitous saloon and gunslingers. We left the boat and walked along the street to a chorus of "hello, goodbye" from pockets of small children, playing games beneath their homes and who eagerly lined up for group photos and a game of football with a punctured ball. We stopped at various points to watch fishing nets being mended, tiny fish

being dried on mats or smoked over charcoal, masses of pink shrimp left to dry in the sun and two women, with their bicycles laden with clothes for sale, surrounded by small groups of women negotiating loudly. In the pagoda at the far end of the street, the monks were painting and repairing a wall and behind the wat, schoolchildren were enjoying a break from their lessons, with a notable increase in the noise level when I walked within earshot. I was informed by a friendly monk that this part of the village is the only dry area during the wet season. I found the village to be full of smiling faces and genuine welcomes, without a hint of the tourist trappings you find elsewhere in and around Siem Reap. We were told by one of the villagers that Kompong Phluk is made up of three fishing communities and nearly 3,000 people live there, though many follow the fish onto the lake at this time of year, explaining why the streets weren't as busy as I'd expected. 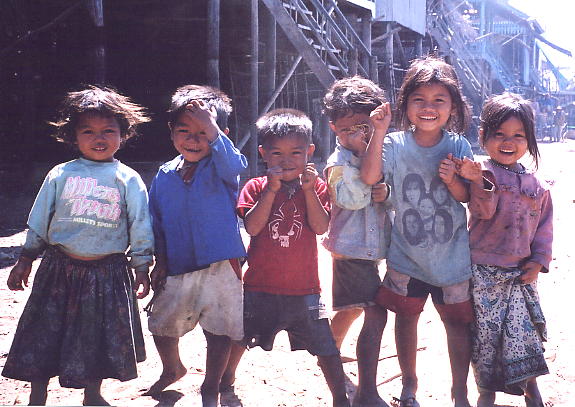 Heng had gone to find a boat to take us to the submerged mangrove forest near the edge of the lake, a

kilometre or so upstream and at 10am we boarded a long canoe, with our oarsmen Ty and Mok, stationed at either end. We paused at a large crocodile pen and next to it a pig pen and to watch a family emptying their fishing nets of their morning catch before we paddled out of the village and along the river towards the forest. Ty pointed out various birds and their calls as we entered the forest and told us he regularly sees monkeys in the tree tops. At this time of year, the water is between 3-4 metres deep as we weaved a path between the trees, occasionally catching the oars in fishing nets strung between tree trunks, though Ty took great care to untangle us before moving on. Our lazy and peaceful meandering, exploring various 'paths' deep into the forest as well as a visit to the choppier waters at the edge

of the lake, lasted for a little over an hour and cost just 10,000 riel - a bargain in my view. We were dropped off at the village's farthest point which allowed us to walk its whole length back to our starting point, where we jumped aboard a larger, motorised taxi-boat for the return trip to the boat dock and our 4WD, arriving at midday. At the half-way point on the track back to Roluos, we stopped to eat our lunch in a rest hut on stilts next to three houses and a broken

bridge. Chicken, vegetables and rice, washed down by ice-cold water and a pleasant breeze was spot-on. We reached Roluos at 1.30pm and crossed Route 6 at Angkram, heading north towards Chan Sar commune and a temple that Heng had visited whilst working for an NGO the previous summer. At the village of Srath, Rieng pointed out a school where he'd spent two days in 2003, guarding election ballot boxes as part of his primary job as a policeman. Half an hour later, we reached the village of Sanloang and in the grounds of the village wat stood Prasat Andet, a large brick tower and a smaller brick library, most likely from the 10th century. Devoid of any carvings and home to a family of bats, the doorway retained a colonette and unfinished lintel as well as the remains of a porch, whilst a miniature temple antefix was perched precariously on a corner of an upper level. Four pedestals and a lotus bud from the summit of the temple were lying in the shade nearby, next to a forlorn-looking monkey on a lead.

On our return to Siem Reap, we stopped for half an hour at the extensive wat behind the market at Damdek to visit the ruins of Prasat Banteay Srei. Surrounded by a moat, the temple is deceptively large with two entry gopuras in the outer enclosure wall, two broken libraries and a central sanctuary with four entrance gates, a surrounding gallery and a handful of defaced lintels, the best of which sports a kala monster munching on a naga. Back at the HanumanAlaya, I called my wife in England, a few friends in-country and was asked by Sina, the receptionist, if I would move to their other guesthouse nearby so they could accommodate a party

arriving tomorrow from the television channel Discovery, in Cambodia to film a tv documentary. Not a problem, I'd stayed there before and it's just as good. I took a moto to the old market and spent an hour in the internet cafe for the ridiculously low price of 2,000 riel, where I bumped into Paul and Sheila Hay, the couple who run the Hidden Cambodia adventure company and good friends of mine. They invited me to their home to meet a group of dirt-bike riders who'd just returned from a six-day trip and were having a goodbye party. How could I refuse. After an enjoyable meal at the Red Piano, I turned up at the Hay residence, just off the road heading towards Angkor, for a chat with Paul and Sheila and an assortment of nationalities, fresh from their trip around northern Cambodia, watched their video and enjoyed the comraderie of a group who'd grown close to each other in the past week. I left them as they sat down for their late meal and was in bed by 10pm - early nights in Cambodia allow for an early start the following morning.