A weekend in Poland & the horrors of Auschwitz 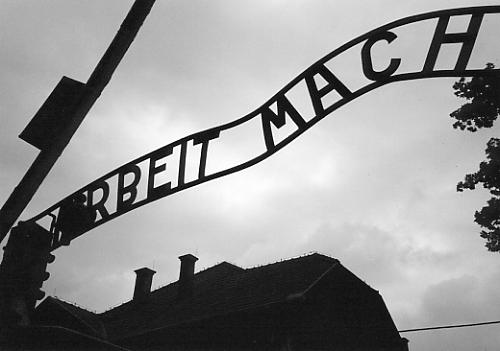 The sign above the entrance gate to Auschwitz encourages the inmates with Arbeit Macht Frei ('Work shall set you free').

Krakow (or Cracow, take your pick) in Poland was the choice of a long weekend for the three Brouwer brothers and their respective wives and partners (Paul and Vivien, Tim and Andrea, myself and Sue), on our first joint venture abroad in July 2003. A beautifully preserved city centre with its engaging medieval 'old quarter', its near neighbour is the infamous Auschwitz-Birkenau concentration and extermination camp, responsible for the deaths of over 1.5 million people, mostly European Jews, during the Second World War. The contrast between the two locations is dramatic though the latter is the destination that will leave an indelible stamp on all of us.

Auschwitz, located in the Polish city of Oswiecim, began life as a concentration camp in 1940 for political prisoners but quickly outgrew itself and the far more substantial Birkenau, located 3 kms away in the village of Brzezinka, took over as the primary killing machine as the Nazis stepped up their plans to exterminate the Jews. In both camps are the remnants of crematoria, gas chambers and prisoner barracks. Auschwitz is the more compact museum with well-preserved blocks housing various exhibitions portraying the history of the camp, whilst Birkenau is spread over 400 acres and was the largest camp in the whole Nazi system in terms of the area it covered, the number of barracks, and the number of prisoners held at any one time. Its the site where you begin to get a sense of the sheer magnitude of the tragedy. More later.

The flight time from Heathrow to Warsaw, the Polish capital, was a little over two hours, as our group of six looked forward to sampling some of the renowned indomitable Polish spirit with our planned visits to Krakow, Auschwitz and Warsaw. On arrival at Warsaw's international airport, we took a taxi directly to the main railway station in time to catch the lunchtime express train to Krakow, some 2.5 hours south of the capital. The Polish countryside was green and lush for the most part though the towns we passed through contained more than their fair share of drab, featureless concrete flats and office blocks, daubed with that colourful graffiti that you find alongside railway tracks everywhere these days. The train itself was comfortable, we had our own compartment, we were served sandwiches and hot drinks and it ran on time. A promising start to our Polish adventure. 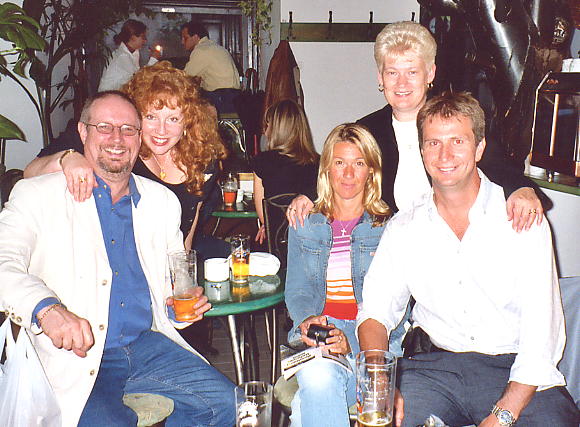 A family snap-shot on our first night in Krakow. LtoR: Paul, Vivien, Andrea, Sue and Tim. The author is behind the camera.

At Krakow's railway station, we were picked up by Jon, our driver with an excellent command of English, and delivered to the Campanile Hotel, located on the edge of the old town. The hotel was new and comfortable and just a few minutes from the main square of the city centre. After freshening up, we walked into the busy pedestrianised Rynek Glowny square to mingle amongst the early evening festivities, pavement cafes, cellar bars and restaurants, teeming with locals and tourists. Over the next two nights we sampled the local Polish fare at two atmospheric cellar restaurants, whilst spending a few daytime hours touring the key attractions in the city centre. In the middle of the elegant facades and impressive period houses surrounding the main square is the 16th century Sukiennice, or Cloth Hall, that now houses a trading centre with numerous stalls, cafes and a small museum. Nearby are the impressive St Adalbert's Church and the Gothic St Mary's Church, with its twin spires dominating the square. We climbed the taller of the two towers, which was exhausting and where a tune is played by a trumpeter every hour, for a glorious view over the city. A walk through the tree-lined park known as the Planty took us to the Royal Castle on Wawel Hill. This former seat of the Polish kings was swamped by hordes of tourists eager to see its Renaissance style State Rooms, gold-festooned Church, gorgeous tapestries, paintings and period furniture. We also took a tram to the former Jewish quarter of Kazimierz, which is undergoing a revival and whose inhabitants were taken away to concentration camps in the 1940's. Krakow has been designated a Unesco World Heritage Site and its easy to understand why. 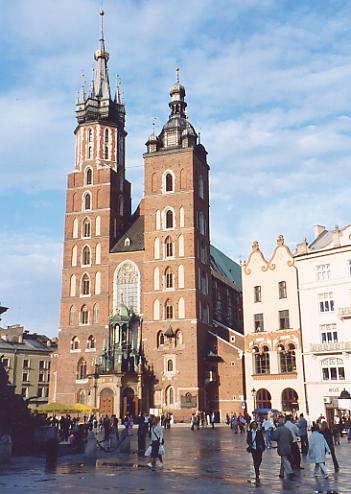 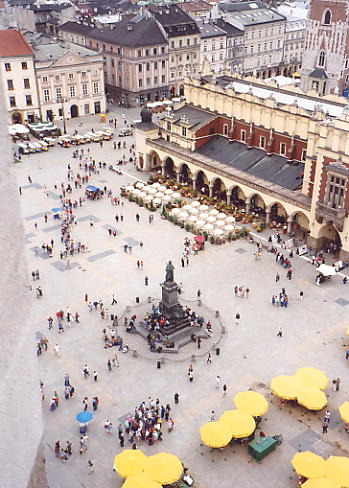 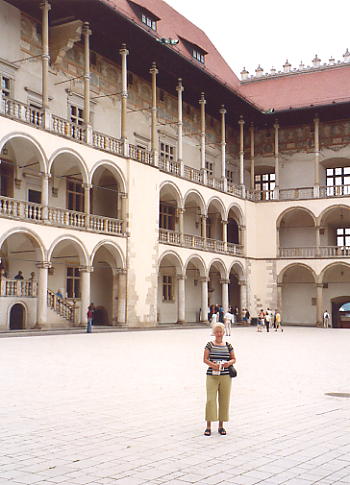 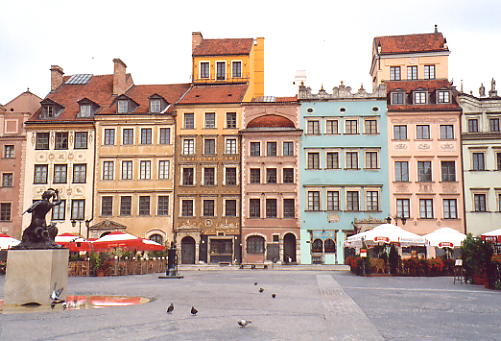 An early morning start took us the 70kms to the city of Oswiecim, better known as the location of the Nazi concentration camp, Auschwitz. With Vivien staying in Krakow to sample the shops, it left the five of us to explore the massive museum site of Auschwitz-Birkenau at our leisure. We hired a guide, Pieter, who spoke impeccable English and watched a short film before entering the original site, under the sign that encouraged the prisoners with 'work shall set you free'. Nothing could be further from the truth. Near to the entrance gate is the spot where the camp orchestra played as new arrivals filed in and just around the corner is the assembly roll-call square and gallows. Over 30 two and three-storey blocks house a series of exhibitions, some of which have been given over to specific countries whilst others tell the Auschwitz story in graphic detail using photographs, written and material evidence. Although Pieter gave us a respectful running commentary, we walked at a slow pace and said little, even to each other, as we saw the evidence of these crimes against humanity, particularly in Blocks 4, 5 and 6 which contain displays of human hair, artificial limbs, spectacles, suitcases, pictures and stories of the children, medical experimentation and much more. Next to the 'wall of death,' where thousands of prisoners were executed, is the camp's own prison where severe punishments and death were meted out including the first experiments with the deadly gas, Zyklon-B. A group of around fifty children, all of them draped in the blue and white flag of Israel, passed us as we made our way solemnly to view the gas chamber and crematorium, which housed two reconstructed ovens, and finally the gallows where the camp commandant, Rudolf Hoss was executed in 1947.

We sat down on a wooden bench to catch our breath and absorb what we had seen and heard. Although I'd seen television documentaries about the treatment of Jews and other prisoners, witnessing where it actually took place, seeing the evidence at first-hand and hearing the stories, made it much more real, and emotionally draining. Though I'd visited S-21, the Khmer Rouge prison in Cambodia, the scale of the Nazi operation at Auschwitz overshadowed even that shocking factory of death. Pieter then tried to prepare us for our next stop, Birkenau, by telling us that the second camp to be built was considerably larger, containing over 300 buildings and four large crematoria and gas chambers. His warning proved to be true. The drive to Birkenau took just a few minutes and Jon dropped us off at the rear of the camp, near the Monument to the Victims, and by the ruins of two crematoria and gas chambers, destroyed by the SS trying to conceal their crimes. We walked along the railway tracks that had been used by the deportation trains delivering victims, often directly to the gas chambers. We visited the brick and wooden barracks and the main SS guard tower, where the view allows you to see the whole prison complex and to begin to appreciate the enormous scale of what took place there. We came to the end of our tour and thanked Pieter for his part in helping us to understand what we'd seen. For me, I'll never forget my visit to Auschwitz-Birkenau. 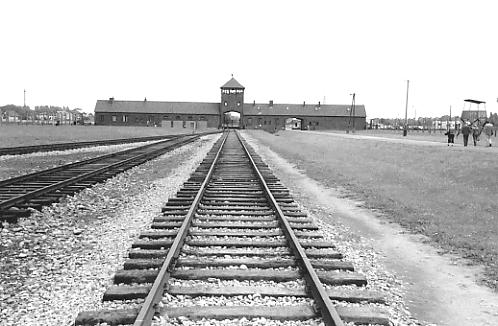 The railway spur leading to the main guard tower of the Birkenau extermination facility. Prisoners called it 'the Gate of Death'.

(Above) A ruined gas chamber and crematoria; a watch-tower; these railway tracks took newly-arrived Jews straight to the gas chambers; those who survived lived in these barracks.

Before returning to Krakow, we took the opportunity to visit the Wieliczka Salt Mine, not my cup of tea but quite a remarkable tourist site nonetheless. In operation for hundreds of years, we had to climb down 378 steps to the first underground level and led by Mila, our guide, we visited a series of chambers, rooms, lakes and chapels, hewn from the saline rock and housing a variety of salt carvings. Easily the most impressive was the Chapel of the Blessed Kinga. We used the lift to return to the surface and onto the last leg of our return to Krakow, just ten kilometres away.

Up early next morning, we bade farewell to Krakow to return to Warsaw by train, and booked into the rather plush Bristol Hotel, about ten minutes walk from the Polish capital's 'old quarter'. Sue and I split from the others to investigate on our own and headed for the reconstructed older part of the city, which like the rest of Warsaw suffered severe devastation during the Second World War. Today, with its cobblestone streets and colourful houses, the heart of the old quarter is the market square with its cafes, restaurants and street artists while closeby and worth a visit are St John's Cathedral, the Royal Castle and the Barbican Gate. I was keen to see what remained of the Jewish Ghetto, so we studied the map and headed for the area where over 400,000 Jews were herded together and later killed or transported to concentration camps. What remains today is a series of memorials squeezed amongst the concrete apartment blocks that include the 1944 Warsaw Uprising shrine in Krasinski Square with two groups of sculptures, the memorial park dedicated to the Heroes of the Ghetto, a sculpture near Gdansk Station commemorating those that perished in the Siberian gulags and an outstanding though intimate museum, Pawiak, on the corner of Jana Pawla II street. A dead tree with commemorative plaques signals the entrance to the museum on the site of a former prison and is definitely worth a visit. Back at the hotel, we returned to the old quarter as a family group for our final evening meal and unanimously agreed that our extended weekend had been a great success. In the morning we flew back to Heathrow, with tentative plans being hatched for the next Brouwer Family Tour. Watch this space. 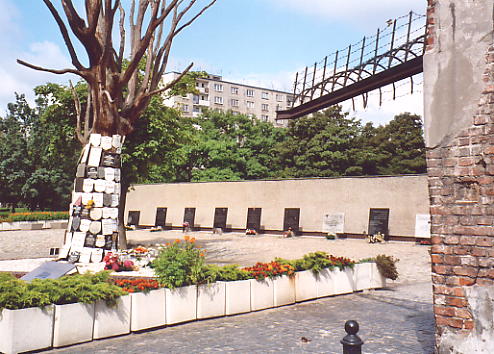 (Above) The Heroes of the Ghetto park; Pawiak Prison museum; a soldier of the Warsaw Uprising shrine. 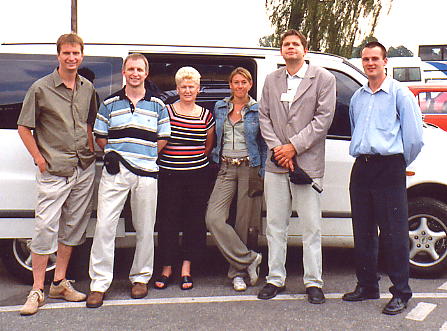