Preah Vihear - on top of the world 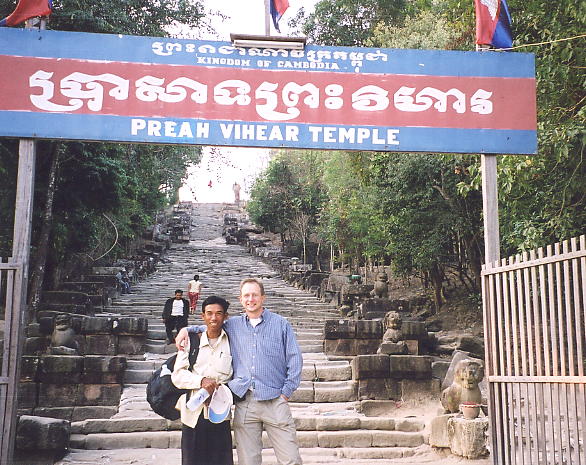 Leaving the village of Siyong at 7.30am, following our visit to the Koh Ker complex of temples, our aim was to reach Prasat Preah Vihear, on the border with Thailand, as soon as possible. I wanted to stay overnight at the temple complex, which has the most dramatic location of any of the Khmer temples, sitting on the edge of the Dangrek mountain range, which serves as the natural border between the two countries. The road from Siyong to Kulen was initially a forest track until we came upon a massive

road-building project, scorching an area through the forest wide enough to accommodate a four-lane highway. The earth-diggers and trucks were working in tandem to complete the road from Tbeng Meanchey to Koh Ker in double-quick time. The temporary earth and sandy surface was hard work for Sokhom's moto and I had to walk at times, which some of the road-crew found amusing, as we took an hour to reach Kulen village, where the broken bridges of previous trips had been fixed and the road was smooth and firm. Thirty minutes later, we stopped briefly at Thnal Bek for food and water, as we joined the road heading northwards towards Preah Vihear. This was the new government road built a couple of years earlier which was excellent in places and atrocious in others.

As well as heading for Preah Vihear, I'd also harboured thoughts of searching around the village of Yeang on the hunt for more remote temples and at 10.30am we reached the turn-off for the village some 20kms northwest. However, the route into the forest looked no better than an oxcart trail and in all probability,

landmines would present a hurdle to my search, so I decided to leave it for another day and we carried onto towards our main goal. The road had deteriorated badly in places and was so poor that our moto even overtook a 4WD, the only other vehicle we'd seen since Thnal Bek. At mid-day we encountered two motos and their passengers on the roadside looking rather forlorn and stopped to offer assistance. Beth and Scott, a couple from London, were travelling from Tbeng Meanchey to Preah Vihear with two moto-drivers but had a flat tyre, so Sokhom came to the rescue with a replacement

inner tube. Half an hour later, we all stopped for a beef and rice lunch in the village of Sro Am (a sign suggested an alternate name of Sraem), at a restaurant next to the monument marking the junction of the road from Anlong Veng. The final leg of the journey took another forty minutes, as we raced along a superb highway which skirted the base of the Dangrek mountain range, arriving at the village of Kor Mouy at 2pm. I paid for an admission ticket to the temple, costing 10,000 riel, as we parked our moto at one of the shops and waited for Beth and Scott to catch-up. The quickest route up to the temple is by 4WD, though the two-way trip costs a hefty foreigner price of $20. Its not feasible to take a moto up the steep track and walking would take at least a couple of hours, so we agreed to share the cost between us and we left at 2.30pm. I sat inside the cab, whilst the others sat in the back and we were all grateful for the skill of the driver in negotiating the road to the top as at times it seemed simply too steep to achieve. The fifteen minute ride was certainly an experience.

We arrived at the first gopura, technically called Gopura V, with the Cambodian flag flying proudly over a temple which has been fought for and argued over for a lifetime. In 1962, an International Court ordered that the temple belonged to Cambodia, but in subsequent years its ownership has changed hands many times, particularly during the civil war when

the Khmer Rouge and the Cambodian army took turns in wrestling control from each other. Today, Cambodia benefits from the many visitors, though by far the vast majority come from its Thai neighbours, who are allowed special permission to cross the border to visit the temple before returning. Our first task was to find a room for the night, so we walked down the main stairway to the small market village just inside the Cambodian border and eventually found a 'room' which was actually a large shelf with a curtain, in a guesthouse that didn't really deserve the description. The word basic is a little too generous, but it still cost Sokhom and myself 10,000 riel for the pleasure! Beth and Scott took the room next to us, which had a door and cardboard walls; the height of luxury. Returning to the first gopura, I wasn't surprised to see the numbers of Thai tourists, but it was very different from my previous visit in 2002 when the border was closed and I had the whole temple to myself. For the next three hours, Sokhom and I wandered

around the five main gopuras of the temple and the partly collapsed main sanctuary, admiring the wealth of decorative detail on the lintels and pediments in situ, of which a remarkable number remain considering the strife heaped upon the temple in the last thirty years. The location, quite literally on the edge of the mountain that overlooks northern Cambodia, has breathtaking views and at 5.45pm, as the sun set across the misty plains some 500 metres below, we sat on the boulders that mark the cliff-edge and under a full moon, absorbed the solitude and stillness, on top of the world. Returning in the dark to our guesthouse 'room' at 6.30pm, after a cold shower, the foodstall had almost run out of food as a few travellers were staying that night and we had to make do with some pork scraps and dried fish, as we sat in the open courtyard alongwith the scavenging dogs for company. We walked around the village, pushed our heads into the karaoke and pool rooms and wandered up to the border post before retiring to our 'shelf' just after 9pm. A little earlier, I'd bumped into a good friend of mine, Paul Hay, who was visiting with a small group of motorbikers and who'd grabbed the best rooms in the village, owned by the local police chief.

Without a blanket, my sleep was intermittent between shivering from the cold and the noise of a rat gnawing away on the other side of the cardboard wall before finally getting up at 5.30am. Alongwith Beth and Scott, I

walked up the stairway and through the whole complex, nearly a kilometre in length, in the semi-darkness, to return to my cliff-edge seat to wait for the sunrise. It finally broke through the haze around 6.15am, much to our joint delight, as smoke from early morning fires on the plains below drifted skywards and a few of the temple vendors arrived to set up their wares. The early morning sun threw a beautiful warm yellow glow onto the lintels and carvings on the eastern side of the temple, as we made our way back through the complex. 'Danger!! Mines!!' signs were much in evidence, with a Halo Trust team still demining parts of the area. The massive nagas at the top of the main staircase looked

particularly impressive in the early light, as we descended the 162 steps to the village below, where we had coffee at the foodstall with Sokhom and Paul Hay. By 8am, we were back at the first gopura waiting for our 4WD driver to return to collect us and twenty minutes later we were on our way down the mountainside. As we descended, we had to avoid the workers laying a new road that will improve the bumpy ride we endured, whilst marvelling at our drivers' ability to keep the truck upright on the testing surface. At Kor Mouy, as I parted company with Beth and Scott, wishing them well on their travels, a loud explosion behind the village indicated a controlled mine detonation by the Halo team. At 9am, we were on the road again retracing our steps via Sro Am and a long stretch of uninhabited and often rough road, eventually reaching Thnal Bek three and a half hours later. We stopped for lunch, beef and rice, and I was a little surprised to see fried spiders on the cooking stove but declined the cook's invitation to sample them.

Forty-five minutes later we skirted around Tbeng Meanchey with Sokhom determined to get us back to Kompong Thom that same day. The road from Tbeng Meanchey is now very familiar, so it was noticeable that

more houses have sprung up along the roadside, considerably more trees have been felled and everywhere, small fires were burning off old rice stalks and undergrowth. We passed a new sign for a temple called Prasat Preah Lean near the village of Preah Khleang but didn't have time to investigate, reaching Phnom Dek at 4pm, where we called into see our favourite petrol attendant, who had a beaming smile as always. As darkness fell, we eventually reached Kompong Thom at 7.30pm, the last 20kms made a lot trickier by the Khmer habit of walking on the highway in pitch darkness without letting fellow road users know you're there! Having been on the road for ten hours, I booked into the Mittapheap hotel and two hot showers managed to get most of the grime off me, as I crossed the bridge to try out the Stung Sen restaurant for the first time. Once known as the best place in town, its now very run down and the two effeminate waiters offered me a lot more than my fried rice and chicken, which I politely declined, and walked to Sokhom's home where I met up with our mutual friend, Caroline Nixon, who was in town for one night only. We had tikaloks and talked until I left Sokhom's a little before 10pm to return to the hotel, at the end of a tiring but very satisfying trip. 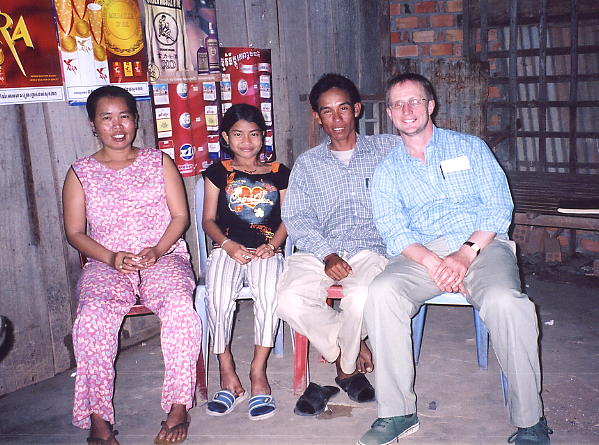