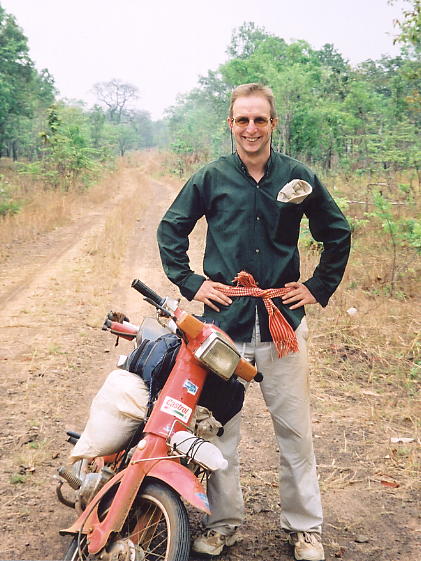 Leaving Heathrow at lunchtime on Saturday 16 March, I reached Kuala Lumpur on the same day as the Formula 1 motor-racing championship circus was in town. Just over an hour later, I was on a Malaysian Airlines' scheduled flight for Phnom Penh, to begin my eighth visit to Cambodia since my first white-knuckle trip in November 1994. There's little to compare with the adrenalin and excitement rush I feel when anticipating another series of adventures in Cambodia. Well, apart from the exploits themselves that is. I was met at the airport by friends and after checking in at the Dara Reang Sey hotel, my home from home in Phnom Penh these days, I eased myself gently into my two-week vacation by spending time with my companions at their home in the Tuol Kauk district of the city as well as watching the sun set over the Boeung Kak lake. The ancient city of Angkor Borei, some 75 kms south of Phnom Penh, was the objective for my first full day and Ran, a moto-driver recommended to me by a friend, picked me up early at 6am. A motodub who speaks English and who I can trust is a vital ingredient for making my trips around the countryside a success and Ran meets both criteria.

Beyond Phnom Chisor on Highway 2, we reached Angkor Borei in a couple of hours and made a bee-line for the riverside museum, where Morm Hon, the curator, showed us around the exhibits, excavated in the pre-Angkorean capital at sites like Wat Kom Nu, which we visited next. Only reachable by boat in the wet season, Phnom Da dominates the surrounding countryside with the 6th century prasat sitting on top. A small hill nearby houses a unique grey laterite tower called Asram Maha Rusei and we stopped to chat to our three young guides before making the return trip to Phnom Penh, stopping at Wat Preah Theat and Vat Prasat to see some ancient lintels. After more than ten hours on the moto with Ran, I dined at the Rendezvous before an early night. Visiting two islands in the Mekong river, Oknhatey and Koh Dach, took up most of the following morning. Silk-weaving was the main highlight although both islands have other attractions, not least the attractive girls we encountered on our trip. I caught up with Peter and Veasna Leth for lunch at the Ponlok restaurant and spent much of the afternoon at the National Museum and along Sisowath Quay. A visit to my friends in Tuol Kauk rounded off the day.

The speedboat to Siem Reap took six hours as the water level on the Tonle Sap lake was pretty low. My great friend Rieng was waiting to greet me and after checking in at my guesthouse, the Cham Nan, we took it easy with a bit ot temple touring south of Siem Reap. Next day, we packed a lot into our morning exploration. We kicked it off with sunrise at Srah Srang and followed that up with visits to Bat Chum, Banteay Kdei, Ta Prohm, Ta Nei and Mangalartha before visiting Trapeang Ropou next to the airport. After lunch, I spent the afternoon with some Khmer friends who own souvenir stalls at Angkor Wat, particularly Noung, a spirited young girl I first met five years earlier. For my evening meal I took them to the refurbished Bayon restaurant. A day's adventure on Phnom Kulen and eleven hours on the back of a moto was exhausting. Rieng picked me up at 6.30am and on the top of Kulen, we swopped to the motos of Phea and Anchor for the next six hours. After pausing at Prasat Damrei Krap, we went in search of large sandstone animal monoliths and weren't disappointed. Prasat O'Pong, Rong Chen (the historic birthplace of the Angkor dynasty) and the seima stones of Bam Gre were next before resting at the dramatic 35-metre waterfall. A great day but travel on Kulen is hard-going, so my hot shower at the end of the day was sheer pleasure.

For my final day in town, I paid another visit to the Angkor Conservation depot, a place I always enjoy and then met Dy Proeung, a thoroughly charming man whose models of Angkor Wat and Banteay Srei are excellent. The Center for Khmer Studies at Wat Damnak is putting Khmer studies on the map and giving Khmer students the opportunity to rub shoulders with international experts. Either side of lunch we drove out north of the Angkor Park to find Prasat Char and Prasat Neam Rup and then returned to the Western Baray area for an easy afternoon trip to visit Prasats Kok Po and Phnom Rung. I met up with my brother at the Red Piano for supper and bumped into Nick Ray, the LP author. Kompong Thom was my destination the next day, the trip taking four hours and almost immediately, Sokhom and I were on our way to Tbeng Meanchey with Preah Vihear as our main target. A fall-out between the Thai and Cambodian governments had closed the border at the temple and the only way to get there was across difficult Cambodian countryside. That was the plan.

It took us five hours to reach Tbeng Meanchey, where we slept at the Mlop Trosek guesthouse. Early next morning, we set off for Preah Vihear and six hours later, arrived at the village of Kor Mouy, at the foot of the mountain. The climb to the top was hot & humid and bathing in the monk's rock-pool was just what the doctor ordered. Preah Vihear's location is breathtaking, sitting astride the edge of the Dongrek Mountains, and that was the view we had before darkness closed in. Our hammocks came in handy as we slept on the verandah of the tourist office, to be woken up by an early morning downpour. Thankfully the mist cleared for long enough to allow me to take photos as I explored every nook and cranny of the deserted temple before it closed in again and we retraced our steps to Kor Mouy village by 11am. By nightfall, we were back in Tbeng Meanchey enjoying tikaloks and reflecting on a tiring two days. Returning to Kompong Thom, we stopped off at Prasat Kraham Chhouk and at Pol Pot's birthplace, four kilometres outside the city. I took Sokhom and his family out for supper as a thank you for their friendship, after a quick stint in charge of his daughter's English class.

Despite the best efforts of my share-taxi driver, I returned safely to Phnom Penh and the Dara Reang Sey hotel by 11am the next day. I met up again with my brother and his girlfriend and we spent the afternoon at the Royal Palace and National Museum, where we caught a fleeting glimpse of the King. That evening we had drinks at two of the capital's plushest hotels and ate at the Globe. A morning by the swimming pool at the L'Imprevu motel and an evening with my Tuol Kauk friends at the Ta Ta restaurant in Prek Leap was just the wind-down I needed after my earlier adventures. My last day was spent visiting a fruit farm in Kien Svay before saying my goodbyes at the airport and catching my 4pm flight back to Kuala Lumpur and onward to England.

March 2002 marked my eighth trip to Cambodia since my first-ever visit in 1994. It's a country that has a special magic all of its own and which draws me back every year to venture out into the Cambodian countryside in search of new adventures, ancient temples and to catch up with the friends I've made from previous visits. Each trip is full of laughter, smiles and a host of fresh experiences and my latest expedition was no exception.