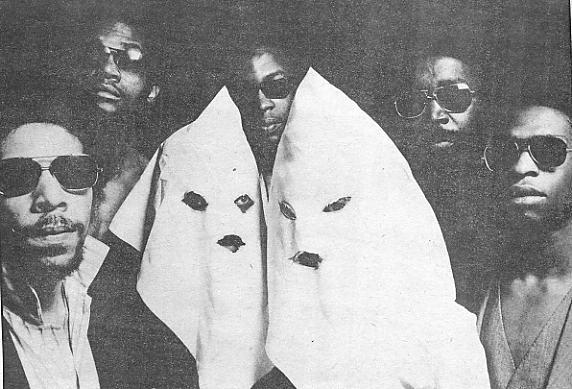 Seems that many black West Indian families who settled in Britain during the early '50s and strived peacefully to integrate themselves into their new surroundings, haven't - in the present imflammable atmosphere of racial disharmony - taken too kindly towards Steel Pulse making waves by performing songs with titles like Ku Klux Klan and National Front. And, according to Steel Pulse's main man David Hinds, himself a first generation British born black from Handsworth, they haven't been reluctant to voice their disapproval. "They feel," says Hinds, "That we're being too heavy, too outspoken." Apparently, after seeing Steel Pulse in a recent Sight & Sound programme attired in Klansmen's hoods chanting Ku Klux Klan, friends of their families warned them of openly inviting trouble. "They want to avoid any trouble with the white community...want to keep the peace and don't think Natty Dread helps keep the peace. See, the truth only stirs up trouble!" If, in Hinds' opinion, speaking the truth causes a degree of trouble, so be it. Even if it means that despite its chart entry, Ku Klux Klan was, with few exceptions, ignored by practically every radio station in this green and pleasant land. "The radio stations don't ban records any longer because they realise it only helps to sell them and when such a record makes the charts, they're embarrassed because they're not playing it."

Hinds is talking during a break laying down tracks for Pulse's Handsworth Revolution album in Island Record's Hammersmith dug-out. He makes it clear he is not assuming the role of iron fisted black militant, neither is he prejudiced towards the white community. Quite the reverse. It was the white community, in particular the punks, that extended support to UK reggae bands such as Pulse, Aswad and Black Slate. This too, has been a source of discontent amongst the more reactionary section of Hinds' community. It could be that British reggae bands are falling foul of the kind of inverted snobbery that Jimi Hendrix had to content with: accepted without bias by white audiences while viewed with deep suspicion by blacks. The controversy currently raging is, whether or not British blacks can play authentic reggae music. David Hinds reckon they can. Many of his brothers think otherwise. To further confuse an already delicate and complex issue, the fact that black music's own new wave of bands gained recognition playing largely to whites impaired their acceptance from that section of the black community only too eager to write off bands like Steel Pulse as being inferior. Frustrated, though not embittered, by such predicaments, Hinds understands though doesn't necessarily appreciate the problems of, as he puts it, being "chanted down."

Hinds would have liked British blacks to relate to the likes of Steel Pulse with the same unprejudiced vigour as the white punks, who've embraced reagge music as an alternative in the same way as '60s mods checked out the sounds of Motown and Stax. "The only time when our own community start to take us seriously is when they see us backing well known JA artists and those artists turn round on stage and say we compare favourably with other JA artists. But," he says sadly, "they have to be told that you're OK - the respect isn't there to begin with. It's a very weird situation," he explains. "Because at the start, we didn't think we'd be accepted by whites either, didn't think punks like reggae music. But at least it prompted blacks to come along to white venues." However, Hinds is pessimistic about this being indicative of both communities integrating to share the same musical affinity. "In the big cities, black and white mix as a matter of course. But, in the smaller towns, the black kids only turn up at white venues to see bands like us because they've never seen a reagge group before. And, they'll probably never go to that club again unless a black act is appearing. They aren't there to mix with white kids of their own age. I tell you," he continues, "it would be a very good thing if you got the black man - the one who really lives reggae music - to come to white gigs. That would help. Like, when Bob Marley played Birmingham, blacks were amazed to see so many white kids in the audience, to see them jumping around, having a good time and singing the songs. That," says Hinds, "confused a lotta people. Some resented it, some said 'Togetherness', a lot of them just didn't care one way or the other."

There's a new generation of British blacks, a portion of whom regard reggae music as the exclusive property of their community. The fear is that the recent blanding out of soul music into automated disco fodder could, due to varicious exploitation (eg. Boney M's Rivers of Babylon), happen to roots reggae. Should that happen it's felt there'd be little, in terms of cultural musical heritage for the black community to fall back on. The writing is spray-canned on the corrugated iron. The fact that Bob Marley is now reggae's most bankable asset has, insists Hinds, resulted in a backlash from many of his devout followers. "Sure," relates Hinds, "everyone still says 'Bob Marley - Original...the only one', but from what I can see, I don't really think that they're into his music as much as they used to be. You don't hear him being played in clubs or on sound boxes. Yet, they know, he's the best...still buy his records because it's Marley. But they say, Marley makes white man's reggae muisic and has lost the original JA roots sound."

Hinds is adamant that Britain's new wave reggae bands aren't compromising their approach to make in-roads into the more lucrative white market, but calling the shots the way they feel them. "What those people who chant us down don't realise," he begins on the defensive, "is that we're actually playing the same licks, it's just that the mix and the different methods of cutting a disc to make it sound a little different." He draws comparisons with many JA studios and the two and three track record shacks which produced '50s rock and roll. "In Jamaica, many of the studios aren't nearly as sophisticated as they are here in Britain, so you get overspill from each instrument and a cheap sound." It's also Hinds' belief that many JA producer-engineers make roaches out of the control board instruction manuals, ignore set recording procedures and work purely on instinct. "Now I'm not saying those records aren't good," Hinds quickly adds, "because they are good. Just that when a band reaches Bob Marley or Third World standards of simple sophistication, they're no longer satisfied with that raw JA sound."

It's logical, says Hinds. to assume that reggae must eventually metamorphise into something relatively new. And, says Hinds, it's not without reason to believe that maybe these new roots could stem from Britain. "Subject matter plays a very big part in reggae. I can't sing about what's happening in Trench Town because I've never been there and it would be phoney for me to try and sing about such a personal situation. My music," says the compser, "portrays the black man in Britain and, that one black man represents each and every other black man in the world. Probably, if I lived in America, the reggae music I'd be producing would have a bit more soul and funk in it, who knows!"

Hinds goes onto insist that Ku Klux Klan - a song he wrote exactly one year ago - is relative to the British black man's burden. "Things gonna get worse before they get better. And, the black man must come to terms with the truth that in many communities he's just not wanted. So, I try to tell those people who chant us down that the only way we gonna mean something in this country is when our music is also recognised by the white community - but that doesn't mean that you're ignoring the blacks. You play to the white market so that the records, the music, the artists can be recognised 'cause everyone is enjoying it, buying it and putting money in the pocket of the black community."

Nevertheless, the older generation of British blacks would prefer Steel Pulse to stick to themes of "togetheness" and keep to material like Nyah Luv (their first single, released on Anchor). They argue that if they ignore the neo-Nazi retards they'll eventually slither under the rock from which they first emerged. They claim, there's not such a thing as bad publicity and that songs like Ku Klux Klan only draw attention to the psycho-sickos. It's Hinds' opinion that turning the other cheek only means you get knocked down twice. "For years, the black man has been put down, told he is nothing and so he feels he has to lose his roots to become something. He cites the once prevalant practice of konking (dekinking) their locks and feels, rather angrily, that many British blacks are beginning to emulate their American brothers - thinking that equality can only be realised through materialism. "An easy way out of a bad situation."

Because of this, Rastas are often frowned upon by the black community, in much the same manner as WASP moralists used to regard hippies as being unwashed, irresponsible and a threat to society! "The feeling towards Rastas is much stronger," Hinds reveals. "They don't think that Rastas are going about demonstrating Black Pride in the right manner. They say it's the dirty way." He adds, "When we perform songs like Ku Klux Klan and National Front, we aren't trying to start trouble between the black and white communities, just that we want both black and white to be aware of what's happening and what it can lead to. Organisations like the National Front aren't just against blacks and Asians, they're against anyone that's not from a British background..." Allow me to fill in the details: jews, Catholics, Irish, Chinese, Italians, Greeks, Cypriots, Gypsies, not to forget homosexuals, lesbians, rock and roll...and that you could be a marked man if you're left handed. "Look, we're not against white people, just that we want black and white people to be aware of what happens to black people all over the world and that it could happen here. Songs like Ku Klux Klan are a warning, not a solution. If there was a solution, someone would have found it years ago. It's just a state you have to accept like..." Death and taxes? "Yeah, like death and taxes!"