The Killing Fields of Choeung Ek

The start of the afternoon was hot and humid as Onphum, my motodub and I made our way through the traffic-clogged centre of Phnom Penh towards the aptly-named 'killing fields' of Choeung Ek. Our route, south eastwards along Monireth Boulevard, took us out through the city suburbs and into the open countryside. At the large glass factory, we veered left and onto a dirt road, past a pile of rusting cars stacked on top of each other and through a rural village of stilt houses. The track narrowed into a rutted single lane, with rice paddies on either side as Onphum pointed to the left at the turn off to the Genocidal Centre. Half a kilometre later, we reached the main gates of the longan orchard turned extermination site. The drive had taken us forty minutes. 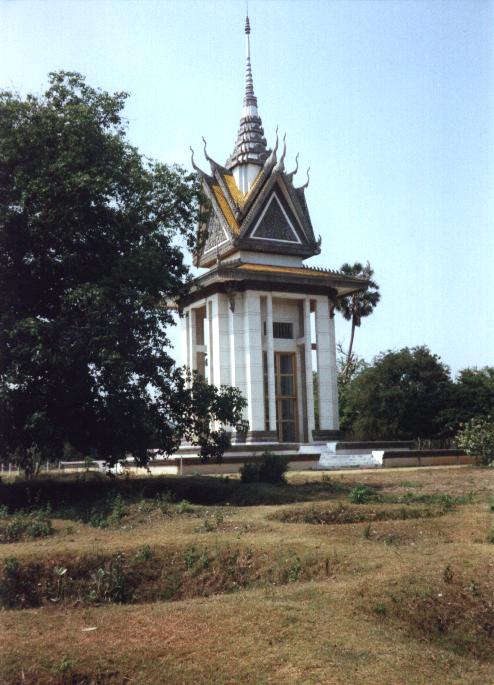 The compound was completely deserted, save for a souvenir stall at the far end of a parking area and a male attendant, sitting on a stool in the shade of a tree, at the front gate. We parked the moto and paid a $2 fee to enter the site. It wasn't my first visit but suprisingly it was Onphum's and he accompanied me throughout in complete silence, wrapped up in his own thoughts. Immediately you enter, you're confronted with the impressively-high white marble memorial chedi that dominates the whole area (left). It has a characteristically yellow-tiled roof with distinctive Khmer gables and was erected in 1988 to house the remains of 8,985 victims that were unearthed in 86 separate graves discovered at the site. These were disinterred in late 1980 and pictures of the exhumed skulls laid out in neat rows on the ground were some of the most graphic images I recall from tv documentaries of the time. The pits had been opened and the bones and skulls removed to estimate the number of dead. Some of the remains were found still bound and blindfolded. They were collected and housed in a simple enclosure constructed of bamboo and thatch as a lasting reminder of the Khmer Rouge period of terror. It also served as a memorial where Buddhist funeral rites could be performed to allow the spirits of the deceased a more peaceful passage to the afterlife.

Choeung Ek was in essence the burial ground for those arrested and tortured at the Tuol Sleng prison in downtown Phnom Penh. Some were killed and buried at the prison itself, but most victims were shipped the fifteen kilometres out of the capital at night by truck, many still blindfolded, some were even made to dig their own graves before they were bludgeoned to death by pick-axe, hoe, iron bar, wooden club or whatever else served as a weapon of death. The Khmer Rouge refused to waste precious ammunition on their victims, many of whom were their own cadre and their families. In addition to the 8,985 victims already exhumed, another 43 pits have been left undisturbed and the final shocking total is believed to be well in excess of 10,000. Incredibly, Choeung Ek is just one of thousands of recorded mass grave sites dotted throughout Cambodia and is by no means, the largest. 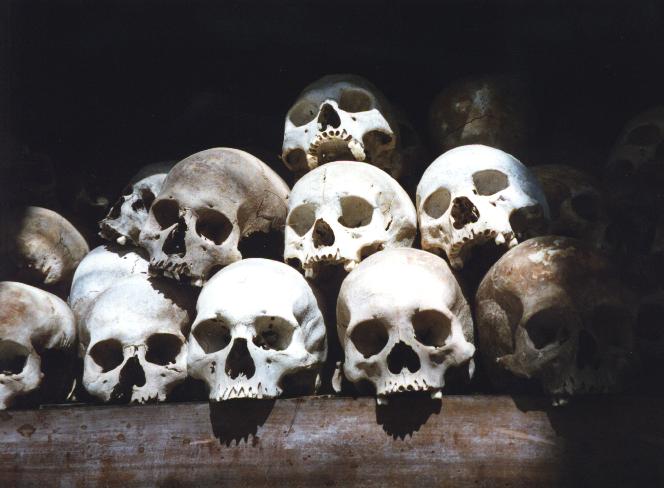 The view of those bleached white skulls lined up, tier upon tier, is both a powerful and disturbing image. All four sides of the stupa are protected by clear glass panels but the ground floor level door is left ajar when the site is open and at close quarters, the skulls are arranged by sex and age, ie. Juvenile Female Kampuchean from 15 to 20 yrs old. It's evident from the cracks and holes in the skulls that many victims died from severe blows to the head, while on the bottom level is a heap of soiled clothing, unearthed alongwith the other remains. Each year, on May 9th, the memorial stupa is the focal point of a gathering to commemorate Genocide Day, when the 1.7 million victims of the three year, eight month and twenty day genocidal reign of the Khmer Rouge are remembered. Off to one side is a small collection of photographs and maps housed in a scruffy and broken glass case. One of the maps shows the location of each of the 86 graves, as well as copies of some of the photographs on show at the Tuol Sleng museum in the capital, including pictures of the site when the graves were discovered. 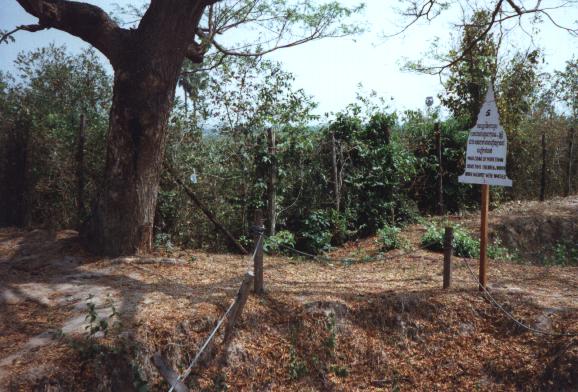 Behind the stupa and the grazing cattle that roam the enclosure, are the open pits. On closer scrutiny, it's all too easy to spot the shards of bone and remnants of tattered clothing underfoot that are washed up after each rainy season, when the craters fill up with water. Some of the largest pits are signposted: 'mass grave of more than 100 victims, children and women, whose majority were naked', 'mass grave of 166 victims without heads' and 'mass grave of 450 victims'. A large tree (left) stands prominently amongst the graves and I recalled a television documentary by Sir David Puttnam, the producer responsible for the film 'The Killing Fields,' which did so much to focus world attention on Cambodia in the mid-1980s. He'd explained that the dark red stain running down the trunk of the tree is the result of where babies and small children were held by their feet and their heads smashed against the tree before being flung into an open pit. I felt chilled as I stood next to that tree and remembered his words.

Onphum followed a step or two behind as we wandered around the now peaceful and serene setting. It was incredibly hot and we shared a water bottle I'd brought along, without talking. Just as we made for the exit, a car pulled up and two American tourists, armed to the teeth with camcorders and expensive cameras, walked in and broke the silence. Outside the main gate, we walked over to the souvenir stall to get an ice cold drink from Ritta, who told us that trade was slow that day and had reduced considerably since the coup midway through 1997. The arrival of the American's car had been a cue for a handful of children to gather by the gate and to whom I handed out some balloons and necklaces, before we were back on the moto and bumping along the sandy track on our return to the city. 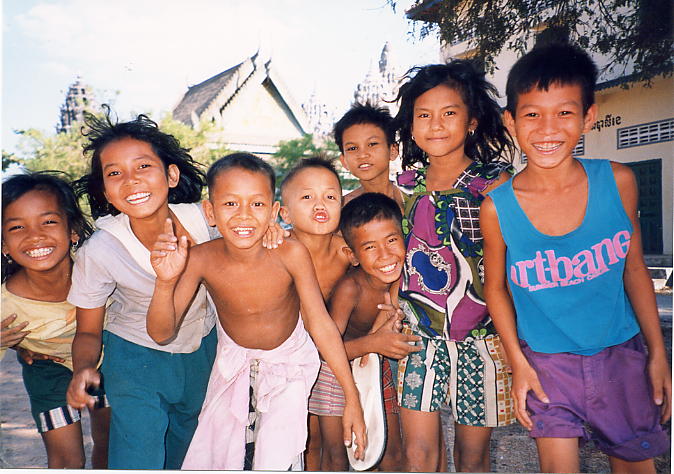 We by-passed a couple of arches denoting entrances to pagodas and detoured to take a look but the wats were small and undistinquished. As we passed through the suburbs of Phnom Penh, we pulled into the grounds of Wat Stung Meanchey, which boasts a large collection of statues, murals and paintings in bright colours. There are several large green phoenix statues and the monk's quarters contain the best of the colourful murals. I joined in a game of 'kop sbek cheung', the Khmer name for flip-flop throwing with a group of eager children (right), and found my aim left a lot to be desired, much to their delight and amusement. They willingly lined up for a group photograph and sent me on my way with handshakes and smiling faces as we made our way back to the Renakse hotel. Enroute, I stopped off at the offices of the Irish charity, Concern at the recommendation of a friend. The project Manager, Rob Williams was only too happy to chat about their work and invited me to their forthcoming St Patricks' Day party, scheduled for my last night in Phnom Penh. 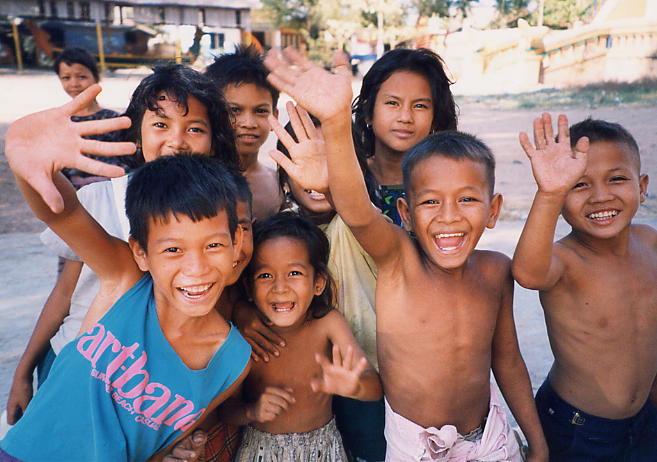