The band's first DVD shares initimate moments and unseen footage from their thirty years in music, with a frank and in-depth interview with David Hinds and Selwyn Brown, punctuated by appearances from a few friends. Produced by Sam Boyero, the DVD runs for eighty minutes, and includes the following tracks: Handsworth Revolution, Gang Warfare, Drug Squad, Taxi Driver, George Jackson, Ku Klux Klan and Rally Round. 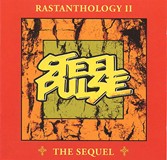 A second compilation of the band's classic cuts, ten years on from their first Rastanthology collection in 1996. The sixteen tracks are taken from their extensive catalogue that spans their thirty years in the music business and includes two tracks, Brown Eyed Girl and Steppin' Out that made it onto the first Rastantholgy CD.