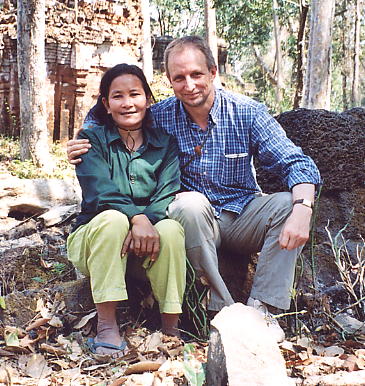 The 5am wake-up call was provided by a combination of wailing dogs (following last night's full moon) and loudspeaker announcements, as the village of Choam Khsan began early, like all other Cambodian villages. We left the guesthouse and stopped for a noddles and coffee breakfast at a busy foodstall next to the crowded early morning market. As the only foreigner in view, I could sense lots of eyes following my every move as I wandered around the market vendors to see what they had on offer. Our main destination for the day was a return to Prasat Khna - located midway between Choam Khsan and Tbeng Meanchey, along the unused back road - so we took the road east out of the village, turning right after 8 kms and headed along the forest track. We didn't see a soul for over an hour until we reached the Prokieb river and stopped to chat to a mother, grandmother and small children. Crossing another couple of dried riverbeds, we entered the village of Kalapia just before 10am, a little over two hours after leaving Choam Khsan. Kalapia is a quiet, spread-out village of 150 families, and we headed straight for the home of Toun Sokheng, who'd guided us on our first visit a year earlier.

We waited whilst she finished her breakfast, and embarrassed me by asking why I hadn't brought the photos I'd promised her. The three of us walked across the rice fields, updating each other on events of the past twelve months before arriving at the 1oth century temple of Prasat Khna, just beyond a large bamboo thicket. It had taken us 25 minutes to walk the 2 kms, with Sokheng decrying the government officials who'd promised to pay her to keep the temple clear of vegetation but had reneged on their promise. In fact, her hard work paid dividends for me, as the lay-out of the temple was now clearer, it was a little easier to clamber around the complex, although still tricky in places, and an additional laterite resthouse building, albeit in partial ruin, had been revealed just outside the main laterite wall. After an exhausting hour of discovery, we sat on the wall to continue our chat. Sokheng's husband was killed in the final flurry of civil war fighting in 1996, leaving her to bring up their three children alone. Now 46 herself - her daughters are Rany (24) and Silon (15) and her son, Mia (13) - Sokheng is a real down-to-earth, immensely likeable woman with a great sense of humour and well-respected by her neighbours, who'd asked her to stand at the forthcoming commune elections. However, she refused because she can't read or write, having been moved to the village by the Khmer Rouge many years ago from her home in Svay Rieng and missed out on her formal education. We arrived back at her house on stilts at midday and shared a meal of chicken, rice and sardines, washed down with Red Bull, before more chat, eventually saying our goodbyes a little after 1pm. I promised to return, and I will.

Between Kalapia and the village of Po, we encountered some ox-cart traffic and stopped for a breather at a newly-constructed wooden resthouse, where a team of female labourers were building a well. The resthouse is to be used by the inhabitants of Po, a very friendly village overflowing with waves, smiles and goodbyes. At 3.30pm we reached the new pontoon bridge over the Stung Sen river - it cost 1,000 riel to take the moto across - just outside Tbeng Meanchey. We called into the Bakan and Phnom Meas guesthouses but decided to try somewhere new, so booked into the Sopheak Meangkol GH, back towards the river crossing. It cost $6 for a double room with fan, tv and ensuite but the main selling point was the owner's friendly daughter, Soktheara, for whom nothing was too much trouble. A warm shower was the first priority, followed by watching the sun set, a meal of chicken soup, beef and fried vegetables at the Malop Dong restaurant and a tikalok fruit shake on the main drag. Returning to our guesthouse, we had a long chat with the owner, his daughter Soktheara (27) and her cousin Dahlin (15) before retiring at 10.30pm, though the karaoke parlour nearby made it difficult to fall asleep quickly.

Next morning, we were up and out for breakfast just after 7am, having thanked our hosts - I liked the hospitality and friendliness of our guesthouse but the noisy karaoke joint closeby is a turn-off - and enjoyed our noodles at the Malop Dong. On the restaurant's tv, it was good to see a program on Khmer culture, with a 15 minute feature devoted to the delights of Phnom Chisor. Back on the road, four hours later, we took a drinks-break at a roadside stall in the village of Salavisay, just under an hour from Kompong Thom. Dany, a shy 21 year old, youngest daughter of seven sisters, told us her rent for the stall is just $1 per month and she treated us to refreshing drinks and a selection of sweets during our thirty minute rest. As we entered Kompong Thom town at 1pm, Sokhom was pulled over at a police roadblock and fined 10,000 riel for not having any side mirrors on his moto, which displeased him greatly, having had his fill of officialdom recently. He explained that he was currently fighting a court battle with the Pharmacy next door, who were claiming his land even though he has title documents to prove his ownership. Land disputes are flavour of the month in Cambodia right now and in court, whoever pays the most, usually gets the verdict in their favour. Sokhom had taken his fight onto local radio and the Cambodia Daily newspaper - I sincerely hope he gets the decision overturned and quickly.

I booked into the Mittapheap hotel - air-con and hot water for $10 - nestled alongside the Stung Sen river, showered, used the internet ($1/hour) at the corner of the market, visited Cristiano Calcagno at the GTZ offices to catch-up with my fellow temple-hunter, who'd recently completed the Angkor Bike Race, and finished a creditable sixth. We had a drink at the Arunras cafe before I took Sokhom, his wife Sroy and Kunthea for our traditional 'goodbye' meal at the Bayon restaurant. $7 provided the four of us with a veritable feast and drinks, while Kunthea showed off her excellent English, proudly telling me she was top of her class in all subjects, confirming that this young girl is definitely an A-class student of the highest order. Back at Sokhom's home, we finished off with tikaloks and chatted with Keo Sambo, Kunthea's teacher who I'd met on previous occasions. An early night at 9.30pm, allowed me an early start at 6.30am next morning, my last in Kompong Thom. After breakfast with Sokhom at the Arunras, we paid a visit to Sroy's family home about a kilometre away. Sroy's father is called Thai, he's head of the commune with the Sam Rainsy Party and we spent a good hour chatting about politics, as well as taking photos with Sroy's three sisters, their children, Thai and his wife, Sun. Kunthea cycled off to the market, returning with three presents for me to take home before I said my goodbyes and caught the coach to Phnom Penh, outside the Arunras hotel, at 11am. My time with Sokhom is always a fantastic adventure and this trip again lived up to that billing. Have no fear, there will be many more in the future. The three-hour coach trip passed quickly as I chatted to the stewardess, Norn Sombo, a 23 year old former teacher from Kompong Thom, who'd joined the Mekong Express company a year earlier. I arrived at the coach company's headquarters near Wat Phnom at 2pm and headed straight for my home-from-home in the capital, the Dara Reang Sey hotel.

January 2007 marked my 13th trip to Cambodia since my first-ever visit in 1994. It's a country that has a special magic all of its own and which draws me back every year to venture out into the Cambodian countryside in search of new adventures, ancient temples and to catch up with the friends I've made from previous visits. Each trip is full of laughter, smiles and a host of fresh experiences and my latest expedition was no exception.