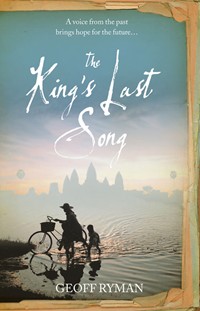 Battles and Buddhism in Cambodia by Justin Wintle. Full review of The King's Last Song at The Independent Online

A positive review from The Independent's Justin Wintle, author of Romancing Vietnam, who found the book mesmerising. Part of his review reads... 'The battle sequence is extraordinary in its detail, colour and brutality, and seems sourced in the friezes that adorn temples of the period, as well as in Geoff Ryman's fertile imagination. But this is only one brilliant sequence in a book of brilliant sequences, some derived from earlier episodes in the lives of Jayavarman, Jayarajadevi and the king's slave concubine "Fishing Cat", others from contemporary Cambodia, and from the survivors of the Pol Pot and Khmer Rouge era.'

...'The King’s Last Song is sublime. Managing to mix religion, a set of likeable characters oh so different to each other, and does it all with some style.'

Geoff Ryman’s writing is at all times highly crafted and deeply evocative, as he skilfully explores the ancient story of Cambodia’s greatest king, and the heart-rending legacy of Cambodia’s recent history. As brilliant, innovative and captivating as you’d expect.

Through The Looking Glass review of The King's Last Song

Reviewer and science fiction critic Iain reviews KLS in his Blog on books.

...Some of Ryman’s work has, of course, been highly speculative, but he doesn’t write space opera, and his latest novel, The King's Last Song, qualifies as genre only in that it is in part a historical novel. Nevertheless, it is a very fine book, and a story that very much needed to be told...

Twelfth century Cambodia gets a mundane makeover... It's a striking image, yet Ryman's narrative moves equally sluggishly, silted up by the weight of its factual material. Mundane science fiction is an intriguing idea. Whether there'll be any takers for mundane historical fiction is a different matter.

Ancient history is still at work in Geoff Ryman's sweeping and beautiful portrait of Cambodia. A precious book is discovered, written on leaves of pure gold and containing the wisdom of a legendary 12th-century Buddhist king. Then it disappears, along with its guardian, Professor Luc Andrade. He has devoted friends among the Cambodians who band together to rescue him and the golden book. Ryman's canvas is as big as Frith's Derby Day, and every bit as packed with detail - every character in the swarm has a distinct face and voice, and the complex story tears the veil from a hidden world.

Rating: 5 out of 6 stars: In Geoff Ryman’s novels, everyone is important. ‘The King’s Last Song’ tells us about Jayavarman, the Khmer king who gave up the pursuit of sainthood to unify his country, but also about William and Map, two guides to the wreckage of modern Cambodia. It is a novel about forgiveness and finding a point to your life to which Map’s quest to atone for what he did in the Pol Pot years is as central as the search of Jayavarman’s crippled son to find a role in a world in which he is regarded as cursed by the gods.

And finding a role, finding salvation, is always to some degree in the hands of chance. Luc, the French archaeologist in charge of the recently rediscovered memoirs of Jayavarman, finds his fulfilment translating them as a way to stay alive in the hands of Khmer Rouge holdouts. His captor Pich comes, without ever softening, to respect Luc’s very different dedication. Map, by contrast, has done, almost by accident, things that neither he nor those around him can forgive; it was his fate to live in terrible times.

Ryman must do in this novel things to which his extraordinary technique has never previously needed to stretch – and he proves equal to the challenge of medieval battle scenes as he has been, in previous books, to phantasmagoric magic, the London Underground, interstellar travel and sex with Picasso. As always, though, he is at his best with friendship, and with love, and that odd area they share; he has always had a talent for making us see, not least into the human heart. In some of this novel’s best scenes, Jayavarman’s intellectual mystic wife and the slave concubine he knew as a child (and who helped him when he was a prisoner) find ways of living alongside each other, of being gracious in sharing.

‘The King’s Last Song’ is a marvellous book about the making of souls which turns out to have more than we might suppose to do with the writing and rewriting of books; both are acts of nervy creativity.

I eagerly awaited Geoff Ryman's novel, The King's Last Song, that links the glories of the Angkor dynasty of King Jayavarman VII with modern-day Cambodia, and I was richly rewarded. It's excellent. I particularly loved the passages that yielded such a vivid and atmospheric recreation of life in the court of the King during the twelfth century that I could almost taste it. Okay, much of it was from the author's own imagination, but I believed it. The book swirls around the life story of Jayarvarman VII written on gold leaves which are found and subsequently stolen. The hunt is on for their recovery and with it, we gain an insight into the Cambodia of today. This book sets a towering standard for new fiction writing on Cambodia that will be difficult to match, let alone exceed. I take my hat off to the author for a wonderful and evocative story that I found impossible to put down. I urge everyone with an interest in Cambodia to buy this book and then encourage your friends and family to do the same.

In the run-up to the book's release in March 2006, I asked Geoff Ryman to fill in some of the blanks about the book itself and his interest in the country. You are widely known for your science fiction and fantasy books, so why a mainstream fictional novel about Cambodia, and what was the catalyst for the book? "I've certainly written and won awards for my SF novels, but they're only about half my work. The most successful novel was 253, about 253 Londoners on a train. It crashes. But mostly the passengers just sit. Was, a historical novel, used The Wizard of Oz as a way into different eras of American history and different kinds of American childhoods, from the 1870s to 1989. In particular about half the book was set in Kansas in the 1870s. The catalyst. Well my first successful fantasy novella, The Unconquered Country was a phatasmagoria around Cambodia. I'd seen a photograph in Look magazine in the States which showed a Cambodian woman in hospital next her soldier husband, not realising he was dead. The image just wouldn't go away, it haunted me for years, especially during and just after the Pol Pot era, when it would have been difficult to travel. Unconquered Country finally came out in 1985. In 2002 I was invited by friends to stay at the Australian archaelogical dig at Siem Reap. I was very lucky and got a tour from the dig director Roland Fletcher of all the monuments in the order they were built, which was an overwhelming introduction to the history.  I came back and immediately started to write the Jayavarman sequences. But there was a lot of expense, research, travel and reading to be done. I went back to Cambodia 4 times in two years, the last trip funded by the Author's Foundation. On my second trip, meeting so many Cambodians during the research inspired the modern plot and the whole modern half of the book took off from there." How close are your ties to Cambodia today? "Gosh, the ties should be closer. While there the last time I tried to help set up a writing workshop. I also recorded and got broadcast on Resonance FM a ninety-minute piece about arts in Cambodia. But a lot of pretty severe changes in my personal life have just got in the way of getting back enough...my mom in California is very ill, etc."

Can you give a brief precis of The King's Last Song? "The made up bit of the story is that Jayavarman VII's son has dictated to him his father's personal memoir. It is written on gold leaves to avoid decay and insects, but during the pro Hindu revolt, the book is buried to preserve it from destruction. We do know from a fragmentar inscription translated by Saveros Pou that texts were ordered to be written on gold. Indeed, the person commanding the writing did have the title Jayavarman, but....so there is some justification for this conceit. In 2004, the fictional memoir is accidentally discovered again. There is widespread concern that such a treasure, containing Jayavarman's words, is not stolen. Unfortunately, it is stolen at gunpoint, and the general and the dig director protecting it are taken hostage. The modern story concerns the efforts of two modern Cambodians to get the book and the Professor back. Map is a Patrimony Policeman with too many bad memories of the wars. Veasna, a motoboy in his 20s helps him... without being aware that during the Pol Pot era, Map killed his parents. This relationship is mirrored by that of  the Professor, a Frenchman called Luc Andrade, and his kidnapper, en ex-Khmer Rouge cadre. By the end of the novel, both of them are working together to translate the Sanskrit of the original into modern Khmer. Intercut with the efforts to get the book back and to translate it are flashbacks to 1960, 1967 and in one long section to do with Map, 1988 and 89. About half the book is idylls of the King, sections of Jayavarman's life from age six up to the consecration of Preah Khan in 1191. It is also interspersed with sections from the fictional memoir. Some poetic license is needed to get the story to flow, and there is still a lot we don't understand about J.VII's life. So I've had to make up/fill in gaps against a considerable amount of disagreement among scholars as to when he might have been born, what his relationship was with the Chams, etc. So the book is a kind of a collage around Cambodian themes. One thing it does not have is a chapter set in the Khmer Rouge era. That time has been more than adequately covered by people who lived through it."

My thanks to Geoff Ryman for his co-operation. Look out for The King's Last Song, coming your way very soon. The author opened the Huddersfield Literary Festival on 16 March 2006 and read excerpts from his novel. The official book launch took place at Daunt Books in London on 20 March, and Geoff Ryman spent the early part of April in Cambodia conducting writer's workshops and launching his novel.

Visit the HarperCollins website to hear audio and read an extract from the book.

If you read other reviews of The King's Last Song, please send them to me. E-mail