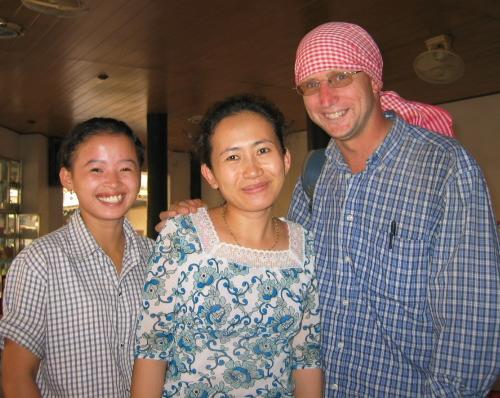 Above: Author (right, with silly head-scarf and dirty shirt) with Dara (center) and Phean at the Dara Reang Sey Hotel in Phnom Penh (January 2003)

What a great way to kick-off 2003...three weeks of reunions with old friends, making new ones and lots of new adventures seeking out some of the least-known ancient temples in the Cambodian countryside. My arrival in Phnom Penh, via Singapore and a brief detour to Siem Reap, was a quiet affair, as my friends forgot I was coming! We soon met up before my usual warm welcome from the two sisters who run my home from home in the capital, the Dara Reang Sey Hotel, and an evening meal with Garrie Maguire, a

photographer from Australia, and friends. An early start the following morning and Sophal and his 250cc dirt-bike carried me across the Mekong River at the Neak Luong ferry crossing and onto the religious site of Ba Phnom and the temple of Preah Vihear Chann. We reached the sleepy backwater of Prey Veng after lunch and finished the day with tikaloks and a nice sunset. Tourists are a rarity in Prey Veng, and it was nice to get away from the hustle and bustle of Phnom Penh.

Making our way north towards Kompong Cham, we visited Phnom Baray, Prasat Prei Dahm Srok and Preah Theat Preah Srei before getting a good look at the new Kazuma Bridge spanning the Mekong as the sun set. Early next morning I saw the killing fields memorial at Wat Nokor for the first time, before our search for temples off Highway 7 revealed Yeai Hom, Tuk Chha, Kuk Ampil Thvear, Kuk Pring Chrom, Prasat Beng, Prasat Kuk Khvet and a re-visit to Prasat Premea Chong Prei and Wat Tang Krasang en route back to Phnom Penh. The hilltop temple site of Phnom Bayang, south of Takeo and just a few kilometres from the Vietnamese border, was our target for the next day, a round trip of over 220 kilometres. It took four hours to reach the mountain on Sophal's dirt-bike and another ninety minutes to climb to the temple, Prasat Bayang. I was exhausted. After lunch we visited the overgrown Preah Ko but it was too late to visit two other temples we could see on the next hill, as

we made a bee-line back along Highway 2 for Phnom Penh, arriving home in the dark. The following day was a rest day, punctuated by my usual visit to the National Museum. Next morning, a moto ride out to Takhmau took me to the new purpose-built headquarters of the Sunrise Children's Village, where I was shown round by Rosanna White and watched the captivating children practise their dancing and singing. Sunday dawned and an early start to what turned out to be a great day, the wedding of my friend Tima and Theary. The vibrant colours and traditional ceremonies were a real joy to witness and made it a memorable event. My dancing efforts in the evening made it rather more forgettable!

I hitched a lift to Siem Reap with Merrily Hansen, a long-time e-mail pal from the States, stopping in Kompong Thom for lunch and to visit the occasionally-open museum. Hooking up with Rieng, a proud dad of just two days after the birth of his first son, we headed out north of the Angkor Park to Svay Chek on the hunt for more temple sites. We located Prasat Kbal Khla, Prasat Tamoch, Prasat Somran and a laterite bridge called Span Thma, before an hour's walk through an active de-mining area and ricefields to find Prasat Seman Ting - a hard slog and little to write home about. That evening I

had dinner at the home of Noung, a souvenir seller I've known for six years. Next day, Rieng and I rode out to the village of Tbeng and located a large brick tower on the crest of Phnom Veak before returning to Siem Reap to visit the Tonle Sap exhibition at Krousar Thmey, to chat with John Weeks at the Center for Khmer Studies at Wat Damnak and to meet Don at the Lazy Mango bookshop. That evening I took Noung, her family and friends to dinner at the Bayon restaurant, later met up with Garrie Maguire and friends at the new FCC bar before retiring to my bed at the Red Lodge guesthouse.

Sokhom. With a little arm-twisting, we set off on his moto for a five day trip to the far north of Preah Vihear province. Nearly five hours later we arrived in Tbeng Meanchey, took the last available room at the Mlop Trosek (a ceremony at Preah Vihear had flooded TBM with visitors) and bumped into Paul Hay and Gordon Sharpless. Next day, we took the new road north and then the turning for Choam Khsan, arriving at the Heng Heng guesthouse at 1pm. The last thirty kilometres, through deep sand, had been tough going. Our target was Prasat Preah Neak Buos and any other temples we

could locate but the local opinion was that only Neak Buos was feasible. The mine-infested countryside makes temple-hunting a risky business in this part of Cambodia. We set off for Neak Buos early next morning accompanied by two guides and though the sandy track was difficult, the temple was well worth it. Swamped by vegetation, Neak Buos is a real gem, with more than a dozen structures of brick, sandstone and laterite and lots of carvings scattered around the site. After three hours of discovery, we stopped for lunch at the nearby police checkpoint to mend two punctures. They could only recall one other visitor in recent memory.

Returning to Tbeng Meanchey, we pushed on to Phnom Dek and then headed for Preah Khan (aka Prasat Bakan), arriving in the nearby village of Ta Seng some ten hours after we'd set off. We visited Prasat Damrei later that afternoon before settling down for the night with a family in Ta Seng. Next

morning we visited the main Preah Khan temple and the satellite temples of Prasat Preah Stung, Preah Ang Thom and Prasat Preah Thkol accompanied by two members of the conservation team. Wholesale looting of the temple has left it devastated with many of the towers and galleries collapsed and in a jumbled mess, similar to the state of Banteay Chhmar in the north-east. A brief pause for breakfast with our village friends before we started back to Kompong Thom, arriving at 4pm, covered in dust from the speeding lorries and cars. The following day we took a leisurely route through the back-roads to Sambor Prei Kuk, visited all of the temples now on view and rounded off the day with dinner for Sokhom and his family at our favourite restaurant.

I shared the front seat of a minibus with an Italian teacher called George for the four hour trip to Phnom Penh next morning. My welcome at the Dara Reang Sey was as warm as ever and that evening I visited the home of Peter and Veasna Leth for dinner. Sophal collected me bright and early next morning for our trip across the Mekong to the Srei Santhor district. We went in search of temples and found a good one with half a dozen great lintels at Preah Theat Baray and then onto the towers of Chan Lung and the brick chedis of Wat Sithor. The district sees few foreigners as confirmed by the stares, smiles, waves and shouts in equal measures. My final day in Phnom Penh was a busy one. I began with a visit to the Ministry of Education to see my friend Sopheap, who runs their website, then he took me to Wat Moha Montrei to pay a visit to Vannak, a monk I met in Sambor Prei Kuk. After lunch, I spent an hour in the company of Thay, one of their translators, hearing about the diligent work

of the Documentation Center of Cambodia. After a massage by one of the blind members of the Seeing Hands massage team, I met up with Debbie and Marc for dinner at the Boddhi Tree. Debbie was one of the speakers at my Magic of Cambodia day in August and they run a tour company in Cambodia called Carpe Diem Travel. Next morning, I said my goodbyes and Roti delivered me on time to the airport for my flight back to Singapore. A two-hour visit to Sentosa Island broke the boredom of a nine hour stop-over at Changi Airport before my Singapore Airlines flight deposited me back at Heathrow, exposing me to the cold and harsh British winter, a considerable shock to my system after a hot and humid three-week stint in Cambodia.

I'm now posted tales from my January 2003 trip [photos to follow]. Read on by clicking the travel tale heading below:

- has the full story of re-discovering an ancient temple which has been long-forgotten and which lies in the far north of Cambodia, nestled against the border with Thailand.

Preah Khan in a mess NEW

January 2003 marked my ninth trip to Cambodia since my first-ever visit in 1994. It's a country that has a special magic all of its own and which draws me back every year to venture out into the Cambodian countryside in search of new adventures, ancient temples and to catch up with the friends I've made from previous visits. Each trip is full of laughter, smiles and a host of fresh experiences and this latest expedition was no exception.