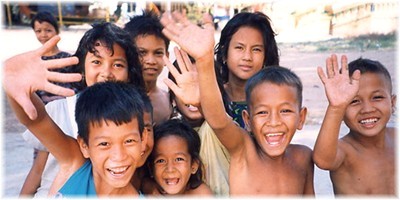 The future of Cambodia lies in its young people. These happy, smiling youngsters were part of a large group I met in the grounds of Wat Stung Meanchey, on the outskirts of Phnom Penh. They found my presence as entertaining as their flip-flop throwing competition, which I joined in, only to fail miserably.

Welcome to my Cambodia Tales - I hope you enjoy your visit. Let me begin by expressing a debt of gratitude to the award-winning journalist John Pilger. It was his 1979 documentary 'Year Zero: The Silent Death of Cambodia' that first grabbed my attention and exposed me to the tragic story of Cambodia (then also known as Kampuchea). I was horrified. Deeply moved by the film, 'The Killing Fields' in the mid-80s, my knowledge of Cambodia as a country improved substantially and more hard-hitting Pilger revelations in 1990, kick-started an affair that has since become a real passion. In the early nineties, my zeal was boosted with membership of the pressure groups, Action Cambodia and Friends of Cambodia.

My first trip to Cambodia, a five-day white-knuckle ride of an adventure, took place in November 1994, after the United Nations' supervised elections had ushered in some semblance of normality to a country wrecked by more than twenty years of war. Two short visits followed in 1996 and 1997 as add-on side trips to tours of Vietnam with Explore Worldwide. Then, a longer two-week solo tour in March 1998, only served to cement my fascination for Cambodia and the Khmer people. I completed a 3-week trip in December 1999 which gave me a further opportunity to see a lot more of rural Cambodia, as did further adventures in late December 2000 and November 2001. March 2002 and January 2003 were to follow (each lasting three weeks) before my tenth trip in December 2003, visiting friends and venturing to parts of the country that I hadn't seen before. As you can see, staying away isn't an option. Alongwith Caroline Nixon, I hosted a Magic of Cambodia Day in the UK and our third such event took place in September 2004. Trip number 13 was in January 2007 before I decided to finally upsticks and move over to Phnom Penh to live and work a few months later.

This website is full of tales from 1998 onwards, comprising my travels in and around the capital Phnom Penh, in Siem Reap, the home of the magnificent Angkor temple complex, and elsewhere in the country. There's also a lot more besides. Cambodia's glorious past is inextricably linked with its tragic recent history. There is no escaping the horrors of the 1970s, every Cambodian was touched by it but now there is real hope that a new chapter has begun on the long road to recovery. I remain optimistic. The Khmers are a special people, they have survived so much and deserve better. The aim of my series of travelogue tales is to illustrate that Cambodia has much to offer the traveller although overwhelmingly, it is the spirit and the warmth of the people that makes it such an exceptional destination.

One of the real pleasures of returning to Cambodia every year was meeting up with old friends. One such friend is Sokhom, a moto-driver in Kompong Thom, a sleepy provincial capital on the main highway between Phnom Penh and Siem Reap. Sokhom is without doubt the best moto-driver around and he's an expert on the region, which includes the northern provinces of Cambodia. The picture (left) was a gift from him, and shows us posing at the top of Phnom Santuk, a popular hilltop spot favoured by locals. Visit my Recommended Guides page to find out more.

Click on Cambodia Tales to begin my travelogues and to navigate the rest of the website. I've broken down my tales into bite-sized chunks to make them easier to digest and have included over 900 photographs to illustrate and bring the text to life. Throughout the site click once on any image to see a larger version and position the mouse pointer over the image to view its caption. If any photograph fails to download, click the 'refresh' icon.

WHAT'S IN MY CAMBODIA TALES

An array of in-depth travelogues from my many trips to Cambodia, alongwith lots of photos. The Cambodia Tales 2 page contains a copious amount of Cambodia-related articles, interviews, bibliography, etc.

I'd like to point you in the direction of some of my pals. Firstly, Loung Ung's book First They Killed My Father was published in 2001 and I was fortunate to meet her in Birmingham in April of that year. Her 2nd book, Lucky Child, was published in 2005.....Click to visit my favourite hotel in Phnom Penh, the Dara Reang Sey and the top guesthouse in Siem Reap, Shadow of Angkor.....Visit my page of Recommended Cambodian Guides .....The Cambodian Arts & Scholarship Foundation.....Geraldine Cox and the children of Sunrise Village.....The story of Li-Da Kruger's return to find her family.....and more.

About the site author:- I was born in the jewel of The Cotswolds, Cheltenham and prior to moving to live in Phnom Penh towards the middle of 2007, I lived in the sleepy cathedral city of Gloucester for fifteen years. I've reached the half century milestone and worked for a UK Bank for thirty-one years, though I now work for the leading Cambodian travel operator, Hanuman Tourism. Main interests, besides the blatantly obvious, are football and music. My first trip to Cambodia was a solo visit in 1994 when the country was still at war with itself, and it hooked me for life. It was the most frightening and at the same time, exhilarating trip of my life. Today I still get goosebumps when I recall those five days that changed my life forever.

This website is dedicated to the memory of Sok Thea (right), a close friend and managing director of a Siem Reap-based tour company, Angkor Adventures, who died much too early in 2000 at the age of 29. I will miss but always remember Thea's boundless enthusiasm, sense of adventure and his friendship.

E-mail me at andy.brouwer@btinternet.com with any comments, suggestions or questions about either this website or Cambodia ...... and thanks for stopping by.

The contents of this website cannot be reproduced or copied without permission of the site author. © Andy Brouwer 2010